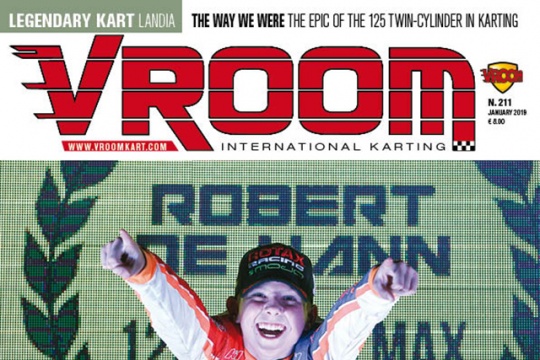 2019: vroom! by Giuliano Ciucci Giuliani
Vroom is getting ready to face the great challenge of 2019. Beginning with the magazine’s publication, increasingly valued and appreciated by fans, it will continue to be distributed via newsstands in Italy and by subscription to the rest of the world in the English-language version.
The magazine has more recently changed its focus by presenting a technically more detailed editorial line, leaving timely news and previews, no longer viable in a monthly magazine, to our growing online platform.
After 30 years of work and commitment to promoting karting, Vroom will once again ensure its important media coverage for 2019, thanks to its great staff and group of reporters. Below, the best wishes of our closest collaborators, people who every month dedicate themselves to this publication with pure passion.
From the most expert and experienced Maurizio, Pierluigi, and Fabio, to the young firebrandsi Andrea and Simone, both tied to this motorsports discipline in a visceral way.
I take this opportunity to thank the many who have collaborated in Italy and across the globe to creating Vroom.
2019 will involve us in a new challenge and we will find ourselves ready to win it.
Happy reading and Happy New Year


Quo Vadis? by Maurizio Voltini
With this beginning of the new 2019 racing season, the karting world (like pretty much everyone else) has now been in this third millennium for almost 20 years. In our sector – and certainly not the only one - we are still wondering, however, what direction the “future” has taken. Without churning up issues that we deal with every month, at the moment the “hope” has a specific name: Felipe Massa. The president of the Karting Commission in Fia is a top driver, but above all he is someone who can observe and analyze certain situations without the blinders of habit. Unfortunately, the “it’s always been like that and so it’s good” is one of the most deeply rooted vices of karting since time immemorial, preventing to understand / anticipate certain changes or, better still, to discern appropriately what was good from what needs to be changed . There are no lack of past examples, alas.
Massa, instead, is a character without too many preconceptions, who has had no qualms about moving from Formula 1 to Formula E, for example. And even the recent decision to prohibit kart engines running in the paddock, regardless of whether this is one of the most urgent problems to be solved, shows how the Brazilian manages to not accept certain situations that are wrong in themselves, even if they are habitual. Of course, the risk is that one may be incapable of understanding when certain acts have a true raison d’etre, that is, to discern when people in kart do as they do for a concrete reason and when due, instead, to simple custom. Massa could maybe be advised by another great Brazilian driver, Rubens Barrichello. Rubens has remained in contact with the world of karting, and not only to follow his children, but even as far as participating in the KZ World Championship at the age of 44.
In short, if one can have a bit of confidence in the future - although the abandonment of Kees van de Grint is not a good sign - it seems to be in these former Ferrari drivers.
The hope is that, in any case, it will be possible to regain the credibility karting had gained when it was the driver’s right
foot that counted more than any other factor. We therefore hope that the new course of the Cik-Fia will go in this direction or at least let us see the classic “light at the end of the tunnel”, because karting - and karting people - deserve it.


Happy New Year, so to speak... by Pierluigi Mancini
I receive a phone call from Giuliano ... in a show of democracy, he gave me the chance to wish you a Happy New Year in my own way, with an editorial. The term “auguri” in ancient Rome and among the Etruscans indicated a group of priests whose task was to interpret the will of the gods from the flight of birds. They did not guess the celestial will in the abstract, but only if decisions already taken by those who command them matched or not. So, as the high priest of karting, I shall express my own good wishes, respecting the etymology of the word, regarding some decisions of the sports authority that, over the years, has done many good things and many ... not so bright things. I’d wish the powers of world karting to open their eyes. Starting from where things are going well: KZ. Shall we decide to leave open  the choice of tires and loosen the rules in the KZ1? More open engines, even non-approved frames, free choice of tire brands. If it is, or should be, the highest geared category, it is useless to make it a kind of useless duplicate of KZ2. Then I wish the usual folks understand that OK is a fantastic category in which you might even dare eliminating the rev limiter, at least in the Senior. And to give the opportunity to demonstrate their value with greater support and more prominence. Nuff said?
I certainly do not forget the good wishes for the 60, where I would like to see some random checks made by a supercommission on the track 5 minutes before the checkered flag of the final, a super-commission made of people with oomph ... because a 60 that by now laps a few seconds from a ... KZ is a technological miracle that deserves very different sort of attention. And then there is the movement of historical karts, to which I really hope every good comes to them in the name of my own great passion. It would not be bad for the manufacturers to help their vintage fans with unobtainable spare parts, don’t you think?
I can guarantee that the God of Speed would be pleased of similar decisions.
With best wishes!


Speed, above all by Fabio Marangon
At the beginning of each new year it is fair to ask oneself whether we will be faster than the year that’s just ended. When a driver, lad or lass, an enthusiast or a newspaper manager who breathes racing fuel writes ‘fast’, this is not just any ordinary adjective. Faster in the sense of keeping pace with innovations and the challenges that an increasingly complex reality presents to us every day, not just on the track. Faster in the sense of being more attentive to details, faster in the sense of being sharp, and always on target. As far as I am – and we are - concerned, we will do our best to write and tell you about this sport from the inside, from the outside, from every possible angle - without ever betraying the true soul of anyone who has fallen in love with this discipline. To disseminate, clarify and create knowledge, always with an eye to the foundations of its the practitioners, the many amateurs, the lovers of the sport, who crowd the tracks every weekend and keep alive what is an authentic passion.


Let’s start once again di Andrea Giustini
2018 is over and the last of the year has brought with it the successes and disappointments of the season just ended. Now it’s time to start again; it is time to put our helmets back on, turn on the engine and lower the visor once more. There are those who slam into first, those who jump, drop the clutch and press the “fire” button, but everyone does it with the same objective: to cut the finish line first. We cannot tell you who the winners of the challenges that await us will be, but we can assure you that we will be here to tell you about them with the same passion that has distinguished us since 1989.
Life is made of passions, thanks for sharing ours.


A 2019 to enjoy by Simone Corradengo
Starting a new season is a bit like the first day of school. We know exactly what we left behind but we do not know with absolute certainty what we will find again. After a past 2018 spent in traveling the globe, races, brawls and new rivalries, starting a new year is more than ever exciting. What I personally feel I can guarantee is that in all cases it will be an exciting adventure that, in the end, will write yet another page of sports history. As usual we will be there to tell you about the new year with the same enthusiasm as always, trying to bring out all the key points of the various competitions and with all the passion that has distinguished us for years. In the hope of living the 31st year together in the best possible fashion, we invite you to get comfortable, settle down and enjoy the show with us for yet another great year.

THE WAY WE WERE

80 Evert Bos and his Landia Kart