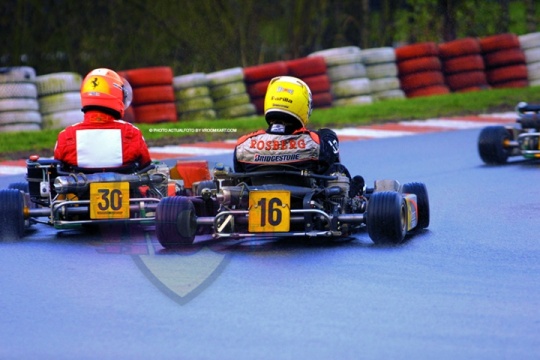 Author: Vroomkart International
On the occasion of Michael Schumacher's 51th birthday, Vroom traces the history of the 2001 FSA World Championship round in Kerpen when the German, already a multiple F1 champion with Benetton and Ferrari, showed up on board a Tony Kart.
At the time we did not talk about OK class, but about Formula Super A, which celebrated the last round of the World Championship in Kerpen, right at the home of Schumacher. And the call for the "Kaiser" was irresistible. Schumi did not win any of the two finals, which went to Sauro Cesetti (Kosmic), but thanks to a formidable comeback he managed to finish in 2nd position in the second Final.


Things do not start well in practice

The beginning of the adventure is not the best; in fact, in the last official practice session the conditions of the uncertain asphalt played a bad turn against Schumacher who closed late, in 22nd place, that corresponded to the 11th row in the starting grid of the two heats in the afternoon.

A circumstance that so upset Michael Schumacher that he closed himself inside his “bunker” (the Tony Kart tent guarded by Security) to vent his anger at not being able to race with the frontrunners.

A series of spectacular heats

In the first heat he manages to recover until he finishes eighth; in the second one a contact at the start and a failure of the water pump stop him from going past P15. So even after the heats, Schumi finds himself facing the finals on Sunday afternoon starting from mid-field.

Champions shine in the rain. The perfect stage for Schumacher. On the extremely insidious asphalt drenched in rain, Schumi finds the right corridor, the outer one, to succeed already on the first lap to parade by in fourth place (another lesson to the "young rascals" of karting). But even on this occasion the German is again unlucky and a front wheel hub breaks, causing him to retire, a bitter end.

The Schumi-show is repeated at the start of the final 2 and this time he sees the checkered flag that waves him past in third place, turned into a second place after the disqualification of Marco Ardigò (Birel).

Fortunately for everyone, Schumacher renounces rushing to Padua for a charity football match with the drivers team and so, after a wait of about 40 minutes, it was possibile to shoot a photo that immortalized him with the new world champion Liuzzi, Ardigò and Cesetti.