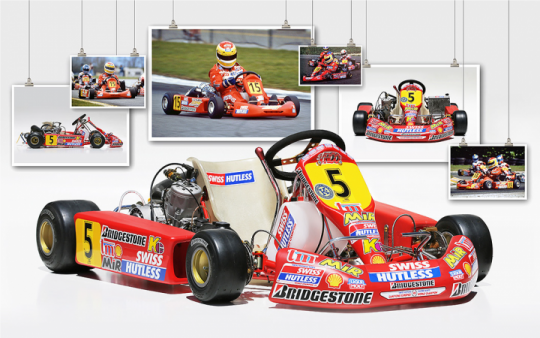 Author: Vroomkart International
The German Taifun kart was very successful at the end of the sixties and at the beginning of the seventies, so much so, that many kart manufacturers at that time were influenced by the shape of the Fritz Schöfer design hoping that their chassis, if made to resemble the Taifun, would perform in a similar manner to the successful kart constructed by Fritz and his two sons in Feldmoching near Munich.
Helmut Brandhofer was one person to follow this trend and began fabricating what was basically a Taifun replica which was marketed as a Hutless. Success followed immediately for the Hutless in the hands of Daniel Corbaz who won the 1969 Swiss karting championship. Brandhofer, who would go on to be a top German driver, also used the Hutless at that time to win many national races. Nevertheless in 1971 Helmut Brandhofer switched his allegiance to Taifun and sold the Hutless jigs, tooling
and fixtures.

Swiss Hutless Formula C
Glenn Davidson , a great enthusiast of restoring karts and well-known for producing loyal replicas of the karts that have made the history of our sport, has recently been working on a Swiss
Hutless. More specifically, this is the vehicle with which Giuseppe Palmieri and Massimiliano Orsini ran (he chose the latter’s race number) in the 1997 European Championship races, wherein excellent results were achieved.