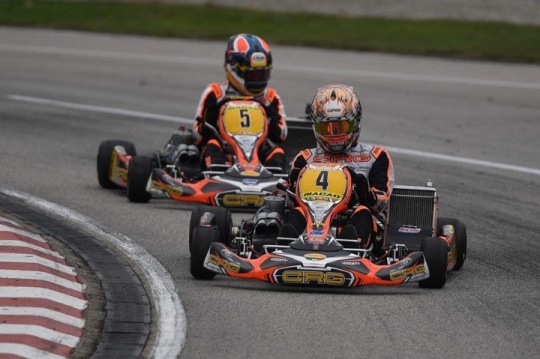 Press Release by: CRG Racing Team
Paolo De Conto secured the second place at the “Macau International Kart Grand Prix”, whiel Pedro Hiltbrand retired after an excellent start.
The closing event of the season took place at the Coloane Karting Track in Macau and CRG’s flag was again waved high in KZ with a podium claimed by Paolo De Conto, while Pedro Hiltbrand has also been a great protagonist, but was eventually hit by bad luck in the final.

Hiltbrand came to the fore at the “Macau International Kart Grand Prix” since qualifying, when he posted the quickest time, while De Conto was second of his group. The two CRG drivers have been the protagonists since the beginning and kept their momentum, as Hiltbrand claimed the victory in the first two heats, while De Conto was fourth and fifth. The third heat ended up with an early retirement for Hiltbrand and a good second place for De Conto instead.

The two CRG drivers run a strong Prefinal, as De Conto secured the win (and the fastest lap of te race), leading an excellent Hiltbrand. Rain in the Final created some problems though: De Conto lost P1 at the start, but kept the second place for all the 20 laps of the race, while Hiltbrand slipped down the field and eventually had to retire eight laps into the race. Marco Ardigò won the race, while Paolo De Conto was second and Luca Corberi third.

Complete results are available at https://racehero.io/events/2018-macau-international-kart-grand-prix/results