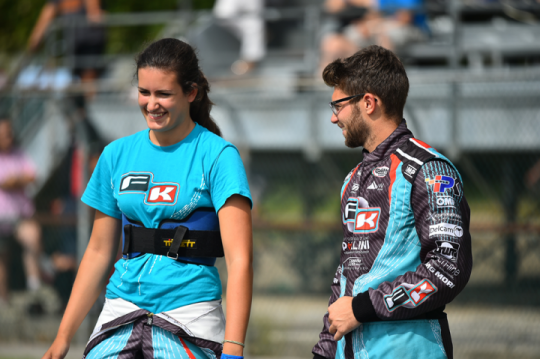 Author: Vroomkart International
After the success of our special feature on women's karting, present in the April issue, we decided to give even more space to the ladies of karting.
The feature column we are launching will be an opportunity to talk about the world of women in kart racing, so we may present and get to know the many Italian and international protagonists even better, an invite, too, or incentive, for our young readers to take the straights to the track and begin their own careers in motorsports.

The protagonists will therefore be all the "racing girls" that once a week will talk to us about their life on - and off - the track.

There will also be "special issues" where we will talk to and highlight experts in the field such as drivers, team managers, Italian and international insiders, and not a few of the many people who bring the paddock to life.

Let's start immediately with a KZ2 driver, Natalia Balbo, a veteran of the final round of the second CIK FIA round at Lonato and of her constant growth and development during the ACI Italian Championship.

Natalia, tell us about your season in KZ - satisfied?
«I have to be honest: at the beginning of the year I had set goals that were not completely achieved, often due to back luck. Having to take stock of the season, I don't consider it entirely positive but nevertheless I feel satisfied with the season. I have improved many things, including qualifying where I wasn't doing too well in the past. This year I almost always finished in the first ten positions of ACI. I have a lot to improve, of course, but I can say that I have reduced the gap to my teammates. I'm happy for the European too. I didn't think it would go so well. Same for the Industrie that I dealt with in a lighter way. In this way I managed to have a good weekend despite adverse weather conditions».

Your year's best moment?
«The Trofeo delle Industrie went very well, especially as we ran the whole weekend in the rain. In any case, I'd say the European; that weekend gave me an extra boost. I really gave the best of me. Being able to qualify in the Final with all the best was something magical. My smile on the grid said it all - laughs - especially after a difficult ACI weekend, always in Lonato. Arriving fourth in a decisive round for qualifying was really exciting, so I want to really thank NGM Motorsport, my family, my mechanic, Gianfranco Galiffa and my sponsors».


Race after race, you are always increasingly more competitive - what is your relationship with male colleagues? Especially on the track where one is never too "kind" …
«Difficult question. It's true, race after race we have improved a lot, the results say so. As for the relationship with my colleagues, that's a slightly different story. I won't deny that there have been some mistakes of mine, even quite important ones such as in Castelletto in the final where in the middle of the comeback I ventured one overtake too many, ending my race then and there. However I must be honest - this year, more than many others, I seemed to have a kind of bull's eye or target on my back many times. We could do well in qualifying and in the heats, but by now we expected to have some "trouble" between the pre-final and the final. I don't know if the fact of being a girl has an influence... I personally don't believe it. What is certain is that all this has taught me to be more bad (sports-wise) and raise the bar in close one-on-one combat; even from this you learn, especially in KZ where one needs brains and courage».

Do you think the FIA ​​should set up an International Woman's Trophy?
«I don't agree on "special championships" because the comparison must be on a par, especially in karting. Also because there are no such necessities of this type. We're at a good level and many of us can compete with everyone, but probably in international races we are not very many. For sure, as CIK FIA already does, I think it's right to set up prizes to spotlight the girls who stand out in their championships, with a minimum of criteria, obviously».

What advice would you give to younger girls who want to enter this world of karting?
«For sure, I'd tell them not to be discouraged by a predominantly male world; indeed, it's good, a chance to bring forth one's skills and courage and show that we are on par. This will require efforts that are not only physical but also mental ... To hear "it's a girl, it's normal that she goes slowly" is not easy. All the same, you have to go beyond all that. I found it easy to stay within this environment because I have pretty much grown up inside it. I admit that female friendships in this world have really helped me. For us it is probably more difficult, but we can do as well. With training results come. We have to devote ourselves to this very much. I see that the relationships with the boys are now more than quiet. On the track I have never seen serious injustice. You simply have to put your head down and charge, continue fighting for the results. Getting results and compliments is a beautiful thing, really».
What do you think of this column?

«I certainly think it's very interesting. It could get many girls who are present who want to succeed out of obscurity (and into the limelight). I also think it could be useful to give an extra boost and encourage people or sponsors to invest more in the "pink" side of karting. Another useful thing, the possibility of getting to know each other and maybe communicating with each other; it would be nice to use this space also to create a bond».