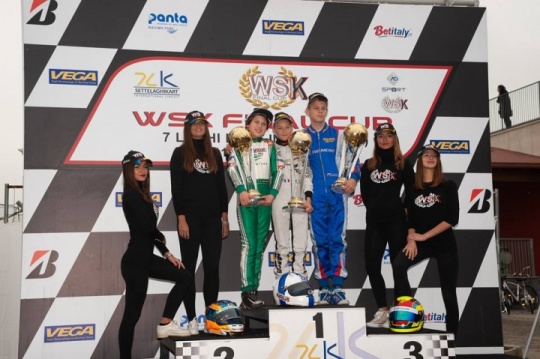 Author: Vroomkart International
The Final Cup 2018 also files away the second of the three scheduled dates for the awarding of the trophy. At the 7 Laghi di Castelletto di Branduzzo (PV) circuit, Eyckmans (60 Mini), Amand (OKJ), Patterson (OK) and Renaudin (KZ) triumph at the end of the day.
The uncertain weather conditions throughout the weekend affected the event and animated the tussle on the dry and wet track.

60 Mini - Eyckmans wins and thanks all
Numerous as usual, the many protagonists of the 60 Mini animated the public of the 7 Laghi with an uncertain Final right until the end. The initial brawl had pole man Alex Powell and the Venetian Brando Badoer prevail over the rest of the group with the Venetian karting driver in first position for more than half the race. The very fight at the top then put Badoer out of the battle for the win, favoring the excellent Ean Eyckmans, who started second and was the author of a completely convincing weekend, which culminated with victory. The same goes for the Briton Coskun Irfan, gaining positions from his starting grid, to finish second. Jamaican Alex Powell finished third. Top five completed by Joel Bergstrom and Dmitry Matveev. Badoer, seventh, after contact. P13 for Saturday's protagonist, Cristian Bertuca, following the penalty for a detached spoiler. Alex Powell leads the standings with 169 points, Eyckmans in second with 137, Irfan at 116 for third place.

OKJ - Amand wins and is a candidate for absolute success
After obtaining the pole position for the Final, Frenchman Marcus Amand left no chances to his rivals. In a long fight with Gabriele Minì, Amand then prevailed on the Italian, and raced ahead in the last part of the race. Pole and victory give the Dino Chiesa driver the second place in the general classification, only three points from the top. On the podium of Castelletto, Laurens Van Hoepen celebrates a great comeback with seven final overtakes to reach second place, behind him third place for Kirill Smal, thanks also to Taylor Barnard's final, from third to sixth on the last lap. Vant T'Hoff and Ten Brinke finished fourth and fifth.

OK - Patterson gives a double win to Kart Republic
With two victories during the heats and the success of Prefinal A, starting pole position goes to World Champion, Lorenzo Travisanutto, a lead that lasts little for the OK leader, with hope of victory dashed on the second lap due to technical problems and a DNF. Nicklas Nielsen, the star of Team Ralf Schumacher and fresh winner of the Ferrari International Finals at Monza, took the lead after the first lap. Victim of the decline in performance, the Dane could do nothing against the fierce competition behind him, namely with a surprising Leonardo Anderutti and Dexter Patterson. The unprecedented leading duo then battled for the stage success, which went authoritatively into the hands of the Scotsman, author of the second win of the day for Kart Republic, thanks to the six positions regained. Good podium for Anderutti, in great shape at the 7 Laghi. Also celebrating, Forza Racing with P3 by Joe Turney, from his P9 start. Fourth place for Nielsen, fifth Sami Meguetonif. Despite the DNF, Lorenzo Travisanutto continues to lead the standings with 141 points, followed by Patterson at 109 and Haverkort with 102, also out of the race.

KZ2 - Renaudin triumphs and leads the general
The French derby ie Denner - Renaudin animates the KZ race, deprived of its top protagonists. At the start, the European KZ2 Champion starts badly, parades by in fifth and complicates his life by himself for the rest from the race. Thanks to the excellent pace shown throughout the weekend, Renaudin then manages to make up positions, battling with his compatriot, closing with an overtake only three laps from the end. Second place to an excellent Denner, ever more among the category's protagonists, third for Axel Bengtsson. The first five positions are completed by Dylan Davies and the first of the Italians, Marco Valenti. Absolute leadership in the hands of Adrien Renaudin with 111 points, followed by Denner with 108, third Lammers with the 90 points collected in Lonato.

Great expectations, therefore, for the last round of the series, scheduled for the weekend of November 25th on the Adria track.