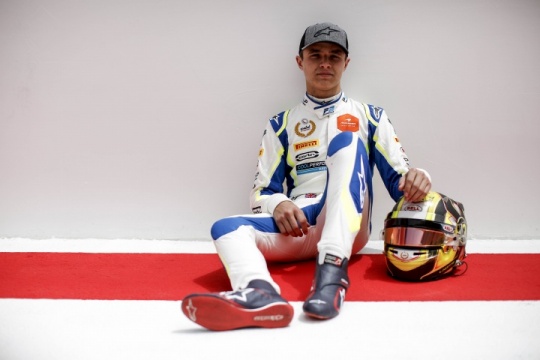 Author: Vroomkart International
A bright and sunnycharacter and that bit of British humor that mitigates the tension typical of difficult times, how Lando Norris shows up at the doors of Formula 1.
“It was not a good year for me,” said Lando Norris in 2014. Certainly not the words that one imagines from a driver who in that season graduated as the youngest Senior World Champion in history.

Though true that the Norris’ 2014 was not an exhilerating year overall, but an 18 year old is expected to have a very different spirit in describing a season that saw him become part of
the great history of karting. The aforementioned statement, however, says a lot about who Lando Norris is, a driver who, despite his very young age, already denotes the pedigree of a champion who before a single victory, important though it may be, shows reserve. And in the social net generation, which seems to measure talent based on followers rather than trophies on
the shelf, such a man cannot but leave his mark. Precisely his hunger for victories has characterized the ascent of Norris onto the Olympus of Motorsport: F1.

An ascent made of 5 titles in 3 years (from 2015 to 2017) beginning with the Toyota Racing Series New Zealand Championship (2015), the double Formula Renault 2.0 NEC and Formula Renault 2.0 Eurocup (2016), and finally the prestigious FIA Formula 3 European Championship (2017). This last trophy is the most significant since, at the wheel of the Dallara of Team Carlin, Norris broke the hegemony of the Prema team that had reigned since 2012, the year of re-foundation of the championship.

But the competitive spirit is not the only fuel in the engine powering Lando Norris, whose most representative feature is an agonistic intelligence that is out of the ordinary for such a young driver.

This thesis is supported by an anecdote dating back to 2013 when the Bristol native competed in the KF Junior among the ranks of the Ricky Flynn Motorsport team.

Full story on Vroom of November.