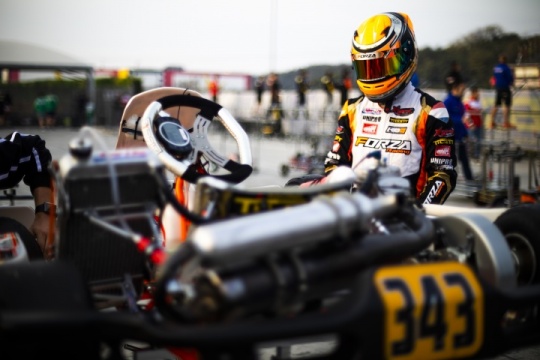 Forza Racing confirms its feeling with the Trofeo delle Industrie, finishing on the podium again in 2018.

In a Lonato flooded by water, the drivers gave proof of their talent, always in the fight for the top spots of the top 10. Raising the cup was Dilano Van t'Hoff, 3rd in OKJ, a category in which the team deployed 4 representatives.

Dilano Van t'Hoff, after 5th place in Official Practice, was the protagonist of a series of excellent heats that placed him in the front row for the Prefinal where, despite the abundant rain, he managed to confirm his potential, earning himself a first row also for the Final where, at the height of an extremely intense race, he finished in 3rd place.

Tikhon Kharitonov proved to be especially at ease on the slippery asphalt of the South Garda Karting circuit and set the record straight right from Qualifying where he finished 4th, the team's best. Despite the increased rain, the Russian nevertheless maintained a high level of competitiveness, finishing in P5 at the end of the Final.

Josh Dufek, after a more cautious start in the wet Official Practice, where he finished 17th, gradually improved his feeling on the wet track, ending the event in 7th position, just off the top 5.

Alex Dunne was called to do overtime to cope with the difficulties caused by the slippery asphalt, due to his small stature. Despite the fatigue in having to continuously shift his center of gravity that driving in the wet requires, Dunne nevertheless did well. In the Final, however, as he struggled for a position at the bottom of the top 10 he spun and was out of the game.

Jamie Croxford, Founder: «It's been a very trying weekend for the weather, but the guys did a really remarkable job. It's from hardships that you learn a lot and I'm sure that this weekend has been very profitable in terms of experience».
Forza Racing will be back on track the weekend of November 11th at 7 Laghi Kart in Castelletto di Branduzzo to compete in the second round of the WSK Final Cup.