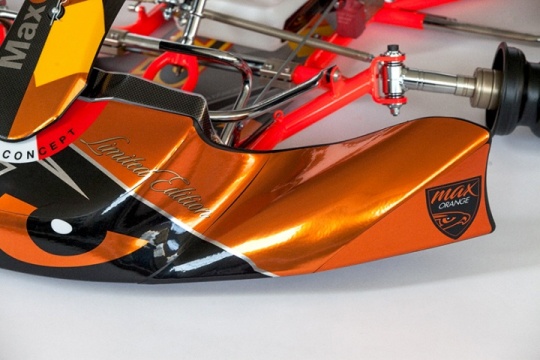 Author: Vroomkart International
Following the latest color trends in the field of graphics, Intrepid offers its range of karts for the 2019 season renewed in its aesthetics, yes, but there is more.
The fairing stickers, already unveiled during the last races of the 2018 season, always feature orange - the official color of the Veneto-based firm's production - but this time, the hues tend towards copper and have a mirror-like effect.

But as we said, besides appearances, the novelties are also more technical, affecting various aspects of the frames. For example, the Cub-2 model for the Minikart class changes considerably, even as it respects the basic parameters of current homologation. Developed following tests with customers and the best drivers in the category, not only does it now flow and glide better in curves and turns ("free" but without giving up grip), it also results to be better balanced on varying tires used and is easier to adjust and set up for the race. The novelties concern both the axle support profiles, the seat and steering column supports, and the positions and radius of tube curves.

In a less radical manner, the frames of the OK and KZ classes have also undergone an evolution, very much focused on rigidity and heights with the supports of the rear bearing holders also changed in the materials used. Here, too, the supports of the seat and steering column have changed via research on Ackermann parameters that have led to new spindles with three attachment points of the steering arms: in addition to the standard, the other two are especially suitable for driving on a very rubberized track or in the wet.

Other new features include the new eccentrics with spherical bushings that make the link between the spindles and the frame work better, the newly-redesigned magnesium hubs (from 70 to 100 mm in front, 80 to 140 mm in rear) also for the Minikarts, and the exhaust supports in derlin to avoid heat transmission to the frame. The braking system has also been improved, especially in the immediacy of recovery at the end of the braking.

Intrepid frames with these innovations are already available in stock.