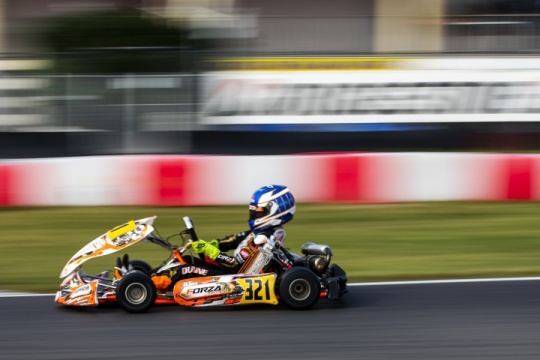 Press Release by: Forza Racing
Good pace for Forza Racing boys in the WSK Final Cup 1st round.
The first of the three WSK Final Cup events was staged at the South Garda Karting in Lonato (Italy). Forza Racing graced the top 10 in OKJ thanks to Alex Dunne, 7th but then relegated to P11 due to the addition of 3" to the final time for a front fairing penalty.

Despite it being his first time at the South Garda Karting circuit, one of the most difficult tracks in the world, newcomer Joe Turney became the protagonist of an ever-better weekend. After becoming familiar with the track on test days, Turney showed a pace at the level of the top 10 in the heats. Alas, a contact in Prefinal B, where he began in 9th, put him out of the match for the Final.

OKJ - Dunne stopped only by a penalty

Alex Dunne's Final Cup began immediately in a positive way in qualifying where he obtained P3 in Q1 and 9th overall. After an encouraging 3rd and 4th place in the first two races, the Irishman had to give in to bad luck in the next two, forcing him to make that extra effort on Sunday. An effort then ruined by two penalties for the spoiler, one in the Pre- final and one in the Final, which however did not prevent Alex from expressing all his potential, closing the weekend in 7th place (which became 11th due to a 3" penalty ), with over 22 passes.

An accident in the Final, instead, thwarted the efforts of Dilano Van t’Hoff, whose weekend had started well with a 7th place in the second qualifying group; 20th absolute. A difficult series of heats then removed Dilano from the top 10, widely within reach as far as the competitiveness of his Exprit / TM was concerned. Starting in P23 for the Final, the Dutchman could not make his mark due to his being involved in an accident in the first stages of the race.

Josh Dufek and Tikhon Kharitinov, instead, did not reach the Final by just a few positions, but also in their case the weekend was positive from the performance standpoint. Josh, after a good qualifying and an equally positive series of heats, was called to make a comeback in Prefinal B, ending in P24 due to a contact that saw him drop to 28th place, 15" from the group.

Jamie Croxford, Founder: "The boys have certainly collected less than they deserved but in any case they put their all in every single session, showing a great spirit of competition. We put behind us an event in which the potential was great, but that we could not wholly fulfill due to several situations unfavorable to us."

The team will remain in Lonato to compete for the Trofeo delle Industrie, scheduled from 26 to 28 October. In the last edition of the trophy the team made a 1-2 with Dexter Patterson and Jonny Edgar in OKJ and took the victory with Chris Lulham in OK.