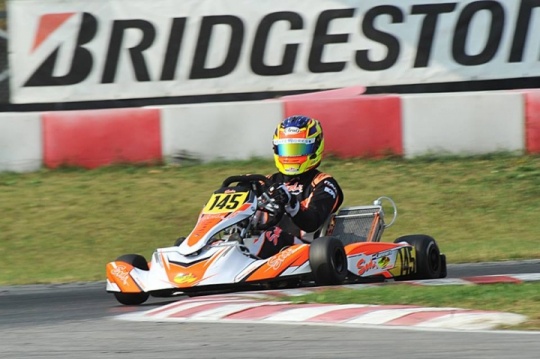 Author: Vroomkart International
The first round of the WSK Final Cup goes into the archives with the first four category winners: Travisanutto (OK), Barnard (OKJ), Powell (Mini) and Lammers (KZ2).
The WSK Finals Cup starts officially with this first scheduled weekend. Four much-contested races that provide a preview of 2019, with a number of new and established protagonists. Below, the weekend report.

OK – Travisanutto starts from first place
The current World Champion, Lorenzo Travisanutto, picks up where he left off, that is, from first place. The Italian of Rosberg Racing puts in a weekend of absolute perfection from the first to the last corner throughout the weekend. Pole position, a series of wins in the heats, victory in the pre-final and domination in the final, give Travisanutto the first round of the 2018 Finals Cup, sending a clear message to all concerned for next season, too. In second place, a good Kas Haverkort precedes the second of the Italians, namely Luigi Coluccio, third force of the Kristianstad OK Championship. Behind the first three, Gabriel Bortoleto gains four positions and completes a very good first weekend in OK. The Brazilian launches himself among the new faces of this category, raising the official CRG colors. Top five completed by Tijmen Van der Hel.

OKJ - Barnard avenges Kristianstad
Rosberg Racing celebrates twice thanks to the success of Taylor Barnard in Junior. The English driver, veteran of the excellent pre-final, snatches the opportunity from pole position, managing a deserved first place and avenging the World Cup. Behind the dominion of Barnard, excellent result for Nikita Bedrin, first of Tony Kart with two gained positions, third compatriot Kirll Smal. The Russian of Ward Racing inherits a placement that initially bore the name Gabriel Mini, subsequently penalized by three seconds for a dangerous maneuver and relegated seventh at the end. Top five for the newly promoted Andrea Kimi Antonelli on his debut to the series, fifth Sebastian Gravlund with 13 passes. Best comeback goes to Matthew Rees with 27 positions gained. Of note, the dangerous incident of the first lap, which saw twelve full retreats and three laps in "slow" regime.

60 Mini - Powell powers through
After measuring up his rivals during the Rok Cup International Final, Jamaican Alex Powell takes home absolute success. Among the weekend favorites, Powell did not disappoint expectations with the victory of the pre-final, amplified by the domain of the final for all ten laps available. Followed by Brando Badoer in second position, Coskun Irfan third. Eyckmans (4th) and Tsolov (5th) complete the top five.

KZ2 - The Return of Bas Lammers
Back to wearing the official colors of Sodikart, Bas Lammers finished the final KZ2 in front of everyone. The Dutchman starts and tries to escape, leaving behind the battle of the Tony Kart. Marco Ardigò and Simo Puhakka give life to a stellar tussle without any exclusion of blows that, in the end, sees the Finnish prevail over the Italian team mate. Puhakka attempts an upset in the final laps by attacking Lammers, but without success. The Sodi driver closes with a single tenth advantage on Puhakka, three on Ardigò. Just off the podium, the KZ2 Champion Matteo Viganò recovers well, fourth after starting from tenth, fifth Emilien Denner in front of Francesco Celenta, sixth. Closing in ninth is Alessio Piccini who showed good pace, but fell victim to a penalty for the spoiler. Tenth, Abbasse protagonist of a spin after the departure, out Iglesias.