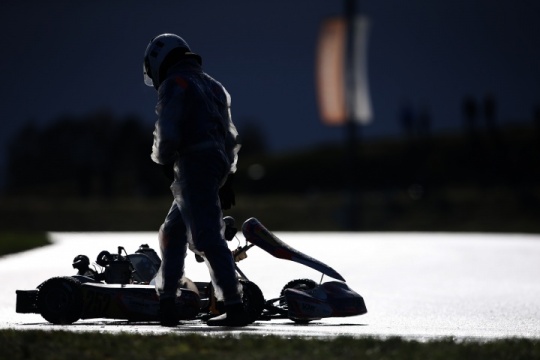 Author: Vroomkart International
WSK Promotion is back! The Final Cup is underway at the South Garda Karting of Lonato.
After a silence lasting almost 4 months, the WSK Promotion Circus is ready to start again with the WSK Final Cup.

Starting this weekend, in fact, in the province of Brescia, is the latest seasonal WSK trophy event with the first of the program's three stages. The Final Cup's format has been revised compared to last year's, as in 2018 it plays out in three events - Lonato, Castelletto di Branduzzo and Adria - instead of last season's two. Unchanged, the classes involved, the usual four: 60 Mini, KZ2, OKJ and OK.

The departure of Rok Cup International Final winner Andrea Kimi Antonelli and the Italian champion Martinius Stenshorne marks a significant re-shuffling at the top. Candidate number 1 for the role of driver-to-beat are: Flavio Olivieri (Revolution), Alex Powell (Energy) and Ean Eycmans (Baby Race). As for Cristian Bertuca (AV Racing) who, according to the paddock's latest rumors, also seems ready to leave the series at the end of the tournament. For the driver from Milano, this will be an opportunity to say goodbye to the entry-level class of the WSK kermesse in the best possible fashion.

In Junior, the spotlight is on the two "terrifying" rookies: Stenshorne (Parolin) and Antonelli (Rosberg Racing), a pair of very young drivers with an already remarkable curricula. The two, however, will have to deal with the drivers who have already established themselves this year, drivers such as Gabriele Minì (Parolin), vice world champion, Kai Askey (Ricky Flynn) and Kirill Smal (Ward). The Final Cup will also be a chance for vengeance for the "disappointed" from the World of Kristianstad, namely Taylor Barnard (Rosberg Racing), who came to close to success, and Nikita Bedrin (Tony Kart).

Hannes Janker's goodbye to racing, announced on the podium of Kristianstad, leaves Lorenzo Travisanutto & Co "orphans" of a great rival. Yet there are many new candidates for his role, new figures in Senior such as Gabriel Bortoleto (CRG), 3rd in the Swedish World, Paul Aron (Ricky Flynn), European champion, and Dino Beganovic (Ward). Ready to join the company is also the new Forza Racing driver, Joe Turney, fresh winner of the Iame International Final. These, plus the already affirmed Nicklas Nielsen (RS), Harry Thompson (Ricky Flynn), Dexter Patterson (KR) and Roman Stanek, who debuts with Tony Kart after spending time at Kosmic.

The race in Lonato promises to be a chance for vengeance on the Genk World Championship. In fact, many are the stars in the starting ranks: Marco Ardigò (Tony Kart), Bas Lammers (Sodi), Anthony Abbasse (Sodi), Jeremy Iglesias (Formula K) and the winner of the KZ2 Super Cup Matteo Viganò (Tony Kart). Also running: Alessio Lorandi (Baby Race), who as usual chooses karting to better prepare his own Formula 2 races.