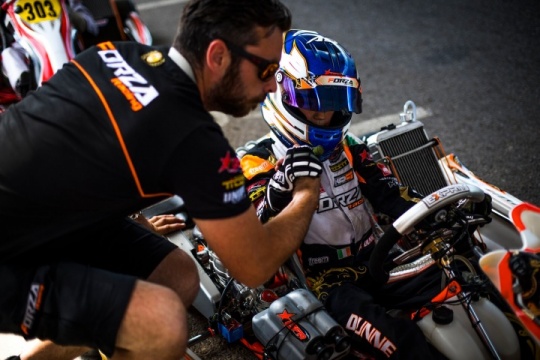 On the track that was born next to the famous 24 Hours site of Le Mans, the drivers found themselves facing an immense challenge thanks to the number of rivals exceeding 400. The high number of participants made it necessary to start the event on Wednesday, forcing drivers to maintain their concentration at peak level throughout the week.

Junior - Alex Dunne finished in 11th position just over 1 second from the Top 10 at the height of a weekend from behind. Between qualifying and the Final, the Irish driver was able to recover 32 positions, the measure of the excellent work done.

Both Isack Hadjar and Josh Dufek, on the other hand, were struck by bad luck. Hadjar was deprived of a positive result due to two "front fairing penalties" between Prefinal and Final which relegated him to 23rd. Dufek, however, after suffering a penalty in qualifying for having hindered a driver, was forced to the rear and in one of the last heats on Friday was involved in an accident that caused injury to his left hand, forcing him to retire.

Super – Frederick Lee was the protagonist of a positive weekend, climbing from P23 in qualification to P14 of the Final, a session in which he recovered 6 positions.

Jamie Croxford, Founder: «It was a race from which drivers learned a lot. Above all, they learned to stay focused for many days seeing how a race of this kind lasts more days than a CIK FIA event. Unfortunately, I cannot hide from being displeased by the penalty suffered by Josh in Qualifying, it's been the most bizarre and ridiculous penalty I have ever received as a team owner. A totally embarrassing decision, that directly resulted in the end of Josh Race meeting. Eventually an apology came from the steward that issues the penalty - but it was too late to change the very disappointing outcome.»

Next, just enough time to pack and get their ideas in order before the team returns to the track in Lonato for the first race of the WSK Final Cup scheduled this weekend.