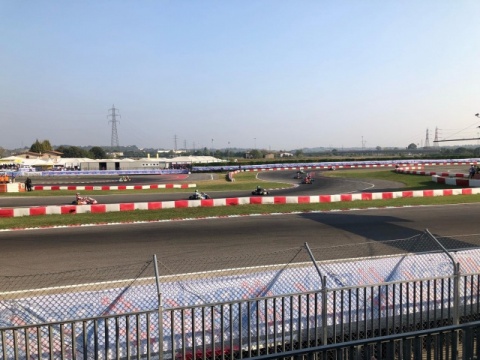 Author: Vroomkart International
The usual Saturday of the Finals closed the sixteenth edition of the year's great Rok event with excitement. The first three finals in the name of pure combat among the top drivers of each class.

Expert Rok - Daniel Zajac puts in the perfect weekend. First in all sessions, the Polish driver concludes with the victory of the Expert Rok Title. A race without emotions, confirmed his dominance already seen in the previous days. An all-international podium completed by Magno Gaia, protagonist of the Florida Winter Tour and vice Champion, applauses and smiles also for Marco Chiari, first of the Italians with seven positions recovered from the start.

Super Rok - Extremely tight fight in one of the most felt categories of the event. After starting in pole position, Luca Bosco then had to deal with the fierce competition of Mattia D'Abramo, Domenico Cicognini, Kacper Szczurek and Alexandre Machado. The match started after just a few curves, Cicognini tries to make up for last year's missed win, but remains bottled up in the close fight with no holds barred. A tough fight that highlights the now former champ Mattia D'Abramo, racing his all. To benefit from all this, the surprise of the weekend, namely Alexandre Machado, who found himself first after the duel that took place before his eyes. Halfway through the race onwards, D'Abramo opens the show with a series of fast laps and overtaking. Maneuvers however too risky for D'Abramo, cause of the front spoiler dropping, but more than ever effective until he tried the attack on Machado's first position. The Italian says goodbye to his dreams of glory when, at the last turn before the finish line, he finishes wide and loses three positions. The race will end shortly after with Machado as Super Rok Champion, Luca Bosco second with merit and Domenico Cicognini, third under the flag. Penalty for D'Abramo, only tenth in the final standings but in any case protagonist.

Shifter Rok - A shifter without Rubens Barrichello, not qualified after the heats, features the first Italian victory of the day. Andrea Zemin does not take long to place himself in first place, leaving the fight behind him. A series of spectacular overtakes between Cinti and the Swiss driver Luyet, second for most of the race thanks to a good crossover in the hairpin of sector 1. At the end of the usual phase of study, Cinti will return to second place completing the podium in front of the Swiss colleague. The best comeback to Gabriele Bensi, ninth after sixteen overtakes.