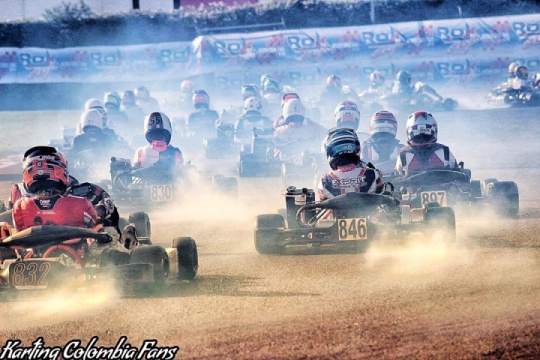 Mini - At the start Alex Powell keeps the lead of the race, while behind him Andrea Kimi Antonelli loses ground leaving space for American Akshay Bohra and Cristian Bertuca. The latter fails in the intent to attack Bohra and even loses meters from the leading group, favoring the return of Antonelli.  Kimi, freed of the American Parolin driver, is fast on the heels of team-mate Powell who he passes to take the leadership.

The Jamaican Powell, guilty of having waited a few moments too many, does not launch the decisive attack if not in a very late sprint at the drop of the checkered flag. The offensive, however, is not successful, thus Antonelli celebrates the victory in the 2018 edition of the Rok Cup International Final. Behind him on the podium: Powell and Bohra.

Junior - At the switching off of the red lights, poleman Pietro Ragone can't hold back an irrepressible Ugo Ugochukwu, who takes the lead. The American immediately gains a few meters, while behind him, Federico Cecchi moved to 3rd from 5th. After 3 laps at a controlled speed in slow mode, the green flag reopens the match. Cecchi immediately takes the 2nd place and sets Ugochukwu in his crosshairs.

On the 9th lap the decisive attack, with Ugochukwu "lunch" for David Locatelli and poleman Pietro Ragone. The duel allows Cecchi to build an advantage that allows him to administer his tire wear in the last laps and thus go to win for the second time in his career the Rok Cup International Final, this ahead of Locatelli and Ugochukwu, who manages to make the podium against Ragone during the 11th lap.

Senior - Alex Brown is the number 1 candidate for the Rok Cup International Final victory. After taking pole position, the Indonesian manages to keep command of the race and to gain space thanks to the fight behind him. In fact, Giuseppe Gaglianò immediately took the place of honor, surpassing Maciej Szyszko. The latter, not perfect at the start, is also passed by his brother Szymon, but returns the favor on the next lap.

The top positions are shuffled by the return of Giorgio Molinari, clearly faster than the leader. Molinari, however, loses his cool, comes into contact with Brown, until then firmly in the lead. The latter drops out of the top 10, while Molinari returns from the escape route in 3rd behind Pietro Delli Guanti and M.Szyszko.  Molinari, therefore, must start all over again and immediately get rid of the Polish driver. The laps that separate him from the finish line, however, are too few when he manages to get just behind Delli Guanti, who then goes on to get the winner's cup of the Rok Cup International Final 2018 for the Senior class. 2nd and 3rd Molinari and Szyszko.