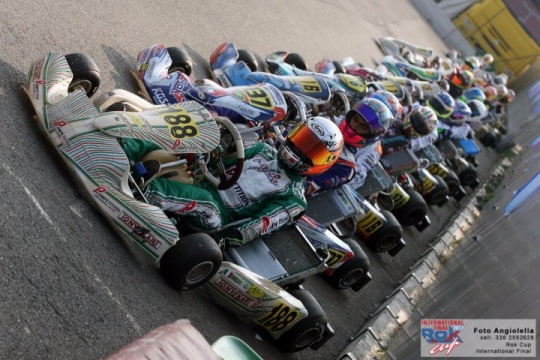 These Rokkers will face each other from next Wednesday at the South Garda Karting track to aim at the final success, but especially, to experience the pure Adrenaline and Action! Let’s discover, category by category, which could be the protagonists, being known that some Rokkers not mentioned, will come into the limelight.

Without the current champion, the American Connor Zilisch, the chase for the Mini Rok International Title is the aim of many promising Rokkers and the name of Andrea Kimi Antonelli stands out among these. The Italian driver already won the Winter Cup in the Mini Rok class and he will now race against some of the most fearful opponents: the Rok Cup Italy champion Lukas Malek (Slovakia), Markos Flack (Australia), Karol Pasiewicz (Poland), Coskun Irfan (UK) and Weywadt Jonathan (Denmark).
During the whole season, also the other Italian drivers Cristian Bertuca, Jacopo Cimenes and Flavio Olivieri had good performances; they actually know the South Garda Karting very well and have been racing for a long time in the Mini Rok.

But the long list of possible protagonists does not end here and we have to remember the Jamaican Alex Powell, who has raced in Europe this season and gained knowledge of tracks, opponents and the whole circus.
Over the years, South Africa taught us not to underestimate its drivers and, for this reason, we must take into the right consideration the Under 10 champion, Nikolas Roos and the Mini Rok national champion, Josh Le Roux.

Among the drivers who have a great potential but still did not manage to gain the success they hoped for we find Rashid Al Dhaheri (United Arab Emirates) and the Czech Igor Cepil, both motivated and, as mentioned, with their papers in order for the winning shot.

We now close the roundup of the possible protagonists mentioning the American Rokkers. These drivers raced a very selective season in the USA and now they come to Europe with great ambitions. The group of the American drivers is captained by the Florida Winter Tour champion, James Egozi and by his deputy, Kai Sorensen.
Among over 150 Mini Rokkers, certainly many names will stand out, so we will be pleased to turn the spotlight on them during the Rok Cup International Final week.

As well as in the Mini Rok, the current champion Luca Bosco will not be racing in the Junior Rok class, as he will be ready to fight for the Super Rok Title. However, the cadet class can boast many Rokkers with an International Title, such as the winners of the Rok Final in the Mini Rok, Connor Zilisch (USA) and Federico Cecchi (ITA), champions in 2017 and 2016, respectively.

A big source of talented drivers is the South America, Brazil in particular, where the Florida Winter Tour 2018 champion comes from, Matheus Alvarenga Morgatto. Other two drivers following in their fathers’ footsteps in the Rok Final are coming from Brazil, Fernando Barrichello and Emmo Fittipaldi. Both will be accompanied by their fathers, Emerson and Rubens and both of them are willing to show off, especially Fernando Barrichello who has gained the right experience in the Junior class to aim at the top positions.
Other two promising drivers are coming from South America, Colombia precisely; they are Diego Contecha and David Cardenas, while the Peruvian Daniella Ore is an outsider who already gained the Panamerican Rok Title.

Ugo Ugochukwu coming from the United States is a very young and talented driver who raced, like Morgatto, both in the USA and in Europe, showing excellent qualities.
Among the Europeans, being able to keep in check the wild group of drivers coming from North and South America, we find Paolo Ferrari, Italian Champion and Rok Italia Champion. Ferrari and Marc Elter (Germany), Nations Cup champion, start among the favorites.

SENIOR ROK.HAJEK FROM ROK TO THE WORLD TITLE

From the victory in this category, which in 2017 was called Rok, the career of the current KZ World Champion Patrik Hajek started. Scrolling the wall of fame, the name of Patrik stands out in the first position in the 2006 edition of the Rok Cup International Final and today he is in the CIK-FIA wall of fame after the Title conquered in Genk (Belgium) driving his Kosmic Kart-Vortex.
The Senior Rok counts Szymon Szyszko (Poland) as former International champion and new winner of the Rok Cup Italy. A good number of national champions, such as Pietro Delli Guanti, ACI-Rok Italian Champion, the German champion Martin Mahler and the Polish champion Adam Szydłowski joins the youngest of Szyszko brothers.

The Florida Winter Tour vice-champion Edoardo Barrichello comes from Brazil, the eldest of Rubens, and mature to try to be the first Brazilian on the roof of the Rok world.
In the Senior, a great many drivers are coming from Asia and among these we are looking forward to seeing the performances of the drivers coming from Rok China, Wang Enqi, Cao Muhua, Ren Juncheng and Liang Yan.
Also Lady Rok is well represented by five ladies, Sara Markucic (Slovenia), Emma Delattre (USA), Tanja Muller, Aneta Martinkova (Czech Republic) and Giada Meneguz (Italy). No wonder that some of these ladies will be probably standing at the top pf the finals on Saturday.

SUPER ROK. D’ABRAMO AND BOSCO FOR THE ENCORE

Mattia D’Abramo (Italy) will try to give an encore of the Title conquered last year. The current champion will find on his way the young Luca Bosco (Italy), winner of the Junior Rok and willing to gain two Rok International Titles in two different categories. Such goal was reached only by Danilo Albanese, able to conquer the Rok International Title, both in the Super and in the Shifter.
Also the South African champion Dino Stermin and the Rok Cup Italy winner, the Polish Kacper Szczurek will go down to the track, both boasting the right qualities to look for the winning shot.

In the Rok Senior final of 2017, Domenico Cicognini, after missing the success, by a hair’s breadth, comes back to the Super Rok after a great season. In the wake of excellent results during the season, we will find also Gaia Cardinali (Monaco), Alex Machado (Andorra) and Christian Comanducci (Italy).
The most performant category of the Rok family (excluding Shifter) will entertain us and, holding fast to its tradition, will elect a champion worthy of its rank.

SHIFTER ROK. BARRICHELLO AMONG THE TOP OF THE ROK

All eyes, at the beginning at least, will be focused on an exceptional Rokker, Rubens Barrichello. The former F1 top driver (Ferrari, Williams, Jordan, Stewart, Honda and Brown) will be racing his third Rok International Final, already showing his qualities and proved to do his best in the past editions.
Among the other Rokkers, Federico Squaranti is the one whom forecasts are favorable for, after gaining the third and second positions in the last two editions, the former Rok Talent is ready to conquer the International title. Federico has recently won the Rok Cup Italy for the second year in succession and this is another reason why he could be the Rokker to be beaten.

The Rok Final will be the stage of the seasonal début of one of the most titled drivers of Rok Cup, Riccardo Cinti, who boasts three victories in the Rok Cup International Final and four Rok Cup Italy. Cinti won in the Super Rok and now the new challenge in the shifter class represents a big incentive where he can show all his experience and speed.
Also Cristopher Zani, before becoming an expert with the gearbox, gained two Rok International Final and one Rok Cup Italy in the Super category.

There are always well-trained drivers coming from Japan and this year too we will have three important drivers in the Shifter: the category champion Kenta Mizukoshi, Hirotada Kobayashi and Kenta Mizukoshi.
Among the Countries bringing high-level drivers on average, we find Switzerland. The Swiss group is made up of Michael Müller, Gabrio Bizzozero, Samuel Weibel, Samuel Luyet and Ivan Rechsteiner.

Also the nation champion, the German Konstantin Kapetanidis will take part in the event and the Lady group is well composed of Fabien Lanz (South Africa), Chiara Zorzi (Italy), Lena Heun (Germany) and Mariana Ramirez (Mexico).
Also Italians will be particularly fierce drivers in this category and, besides the already mentioned Squaranti, Cinti and Zani, also Andrea Zemin, Alessandro Buran and Gabriele Bensi have their papers in order to cut a fine figure.

EXPERT AND EXPERT PLUS. LOOKING FORWARD THE FIRST CHAMPIONS

The two Expert categories are making their absolute début this year and do not have designated champions. Also in this case, drivers are coming from all over the world and certainly none of them will leave the track without making their best. So, let's wait for very tight races that will give us the first two Expert champions!