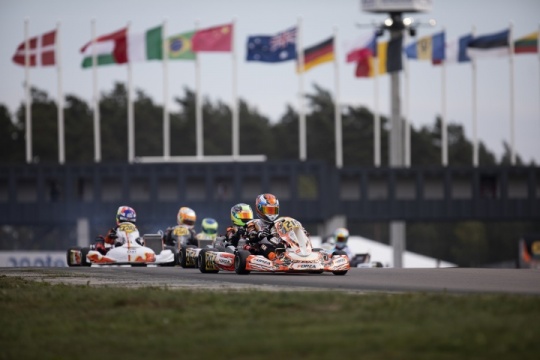 Jamie Croxford's boys, both in Senior and in Junior, demonstrated the prime quality of the Exprit/TM (prepared by GFR) package in the CIK FIA World Championship, but were held back by the adverse weather conditions and several episodes that affected their result.

Senior - A font fairing penalty deprived Jonny Edgar his P5 in the Final and saw him pushed back to P14. In the 25 laps of the race, the Brit had fought and rushed his way through18 positions from his starting grid on the 12th row. Elias Seppanen, on the other hand, did not manage to qualify for the Final.

Junior – A DNF while he was at the head of the heat and a front fairing penalty in the Sunday heats, which had seen him victorious, prevented Dilano Van T'Hoff from qualifying in the first group. The Dutchman, however, put on a show of his talent recovering numerous positions in the Final, although another front fairing penalty dropped him to P18 after finishing in P8.

After a series of regular heats, Alex Dunne just missed out on the top 10, closing 11th. Josh Dufek, on the other hand, finished in P21 ahead of teammate Isack Hadjar, whose drive showed how his talent is flourishing by making up 10 spots from the start.

The downpouring rain that fell on the Åsum Ring on Saturday, during the heats, did not help Alexandros Kattoulas and Tikhon Kharitonov, who missed accessing the Final by a few points.

Jamie Croxford, Founder: «The final results betray the great work that the boys have done. Many of them have yet to gain experience but, despite this, they have shown a great desire to learn and never pulled back before the difficulties given by the climate. I want to congratulate the whole team and thank our partners Exprit, TM Racing, GFR, Unipro Laptimer, Tillet Seats and Vrooam Products for their support in the CIK FIA World Championship».

The team will now have a few weeks off before returning to the track on 8 October for the Iame International Final in Le Mans.