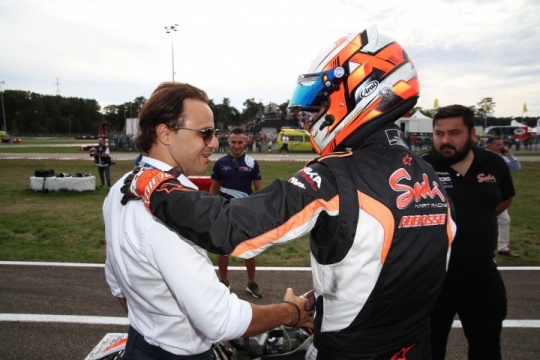 Author: Vroomkart International
A hardly satisfying year this 2018 CIK FIA season for Anthony Abbasse.
After a World Championship CIK FIA KZ 2017 as an absolute protagonist, Anthony Abbasse ends the 2018 event in Genk with a retire.

The Sodi driver's World Championship had started encouragingly with the 5th absolute time in qualifying, then replicated at the height of the heats in which he also achieved a success.

In the Final, after grabbing the 4th place following the accident between Marijn Kremers and Simo Puhakka, Abbasse was forced to retire due to a crash of which he was totally innocent.  Incident or not, however, there remain questions about the 2018 Limetz driver who, after an encouraging start during the cold months, failed to confirm expected performance with the rising temperatures.

«Starting from the CIK FIA World Championship, obviously I'm sorry about not finishing, but I have to admit we were not 100%. Despite this, however, between Friday and Saturday we were in the upper part of the top 10. My problems in the race started in the Final with the accident on the first lap (between Kremers and Puhakka) where, coming in contact with Fabian (Federer), my bumper came unhooked. Soon after, I was hit by behind and I couldn't avoid ending up against Jonathan Thonon; I feel bad, but unfortunately the races are sometimes like that».

«As for our level of competitiveness, things didn't go as we expected. At the beginning of the year, with the cold, we were very fast, but then with the passing of the races we lost our shine. Although we've been working hard, we haven't yet found a solution; these things, of course, require time; in karts there's never a single factor that solves problems, but everything depends on the whole».