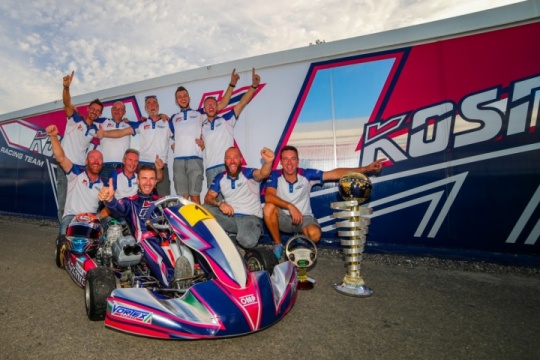 This time they got it in the master class of shifter karts, the KZ, on the Belgian circuit in Genk, thanks to Patrik Hajek who had a fantastic weekend, playing a leading role, gaining the Title of the First World Champion in the master class coming from Czech Republic.

On his Kosmic Mercury S powered by Vortex, Patrik started his weekend on the right foot, centering the third time in the qualifying heat. However, he even exceled in the eliminatory heats: no one could worry or beat him. The result was three victories out of three heats, enough to assure him the first position for the final. In this last round, Hajek does not miss anything, holding the first position from the start to the checkered flag, at the end of the 23 laps. During the whole race, the couple Kosmic-Vortex proved to be invincible and, even if in KZ class gaps can be measured in milliseconds, Hajek ended the race with almost 2 seconds’ lead over his direct opponent.

On the Belgian circuit, the Kosmic Racing Department gained good results also in the FIA Karting International Supercup for the KZ2 class, thanks to Paul Evrard. The French driver stood out with his two fifth positions in the qualifying heats, allowing him to race the final. He unfortunately had a crash at the first bend, holding him in the backline and preventing him to aim at the top positions.

After a few difficulties during the beginning of the weekend, his teammates Axel Bengtsson, Oliver Rasmussen and the newcomer Samuel Luyet managed to improve their performances progressively, with Bengtsson and Rasmussen centering a fourth position each. This was however not enough to accede to the final race of the weekend, but this will be of course a very important experience in view of the following races during the season.

The Kosmic Racing Department, instead, will go down to the track with the direct-drive classes, Junior and Senior, during the weekend of 20th-23rd September on the FIA Karting World Championship on the Swedish circuit in Kristianstad.