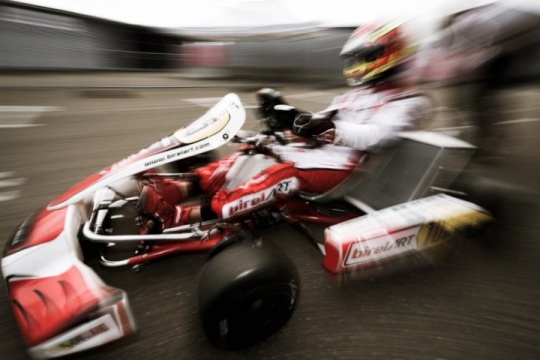 Press Release by: Birel ART
vThe Birel ART chassis is one of the current benchmarks for the gearbox categories in the world of karting. But motorsport is sometimes ruthless and regrettable circumstances deprived the Birel ART-TM karts of the result that the whole team deserved.
A legendary recovery in the International Super Cup KZ2 for Riccardo Longhi, who set many fastest laps during the meeting, and especially a place on the front row of the Final of the KZ World Championship for Marijn Kremers.

Kremers: a contender for victory in KZ

Under the direction of Ronni Sala and team manager Davide Fore, the Birel ART Racing team did not skimp on its preparation for the major annual event for KZ, a discipline that attracts thousands of drivers around the world. In Belgium, as soon as the Birel ART chassis took to the track on the famous Genk circuit, the Qualifying times spoke for themselves, with a succession of performances at a very high level.

Marijn Kremers started his World Championship with 2nd in the timed practice. The Qualifying Heats for the Dutchman continued in a very positive way. "I finished 2nd, 1st and 2nd in my heats, while achieving a fastest lap in the race," said Marijn. "I was really very optimistic for the Final. Alas, on the first lap, I was surprised by the braking from a driver in front of me and I could not avoid the collision. It's a pity to see this podium disappear, even a possibility of victory."

Bad luck also fell on Jonathan Thonon, caught in a collision despite his efforts at the start of the Final. Too bad, because the Belgian has shown great things with his Birel ART (three times 7th in the heats), when he had not raced at this level for over two years! The recovery to 13th position for the Dutch private driver Guust Specken should also be welcomed.

Longhi: fastest in the Final

In the KZ2 International Super Cup, Riccardo Longhi finished with the absolute fastest time in the last Free Practice before the official Qualifying. "The traffic did not allow Riccardo to confirm his great speed and he had to settle for 26th place," said Davide Fore, the team manager of Birel ART. "This resulted in him meeting clashes in the pack in the heats. Despite two wins and two fastest laps in the race, he started the Final in a distant 28th position. From then on, we knew that victory had gone. However, he wanted to give us a show by coming back to 5th position. He was again the fastest of the 34 finalists (two tenths faster!) And that gives us many regrets. In any case, our Birel ART-TM karts were very effective at this big world meeting. Congratulations to the entire team and our engine manufacturers."

Always present in major events, the Swede Alexander Dahlberg finished in a magnificent 9th place out of 105 participants, while having won two heats! The Ukrainian Ivan Peklin and the English Thomas Bale were also in the field of the Belgian meeting. From the Birel ART Racing KSW team, Valentino Fritsch and Robert Kindervater were honoured to be among the finalists.