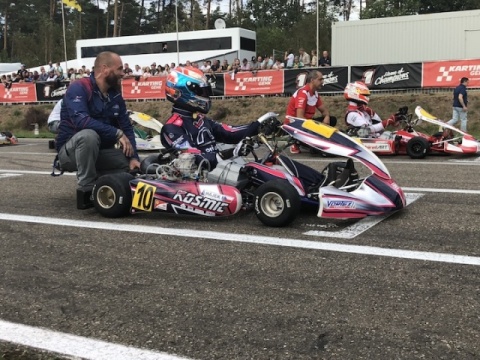 Author: Vroomkart International
From near retirement to the summit of the CIK FIA panorama, the history of Hájek's world.
There is a history behind Patrik Hájek's victory in the CIK FIA World Championship, which gives the result an even sweeter flavor.

We need to go back in time, April, to the last round of the WSK Super Master Series in Sarno. Under the Kosmic tent, the Czech explained to us the reason for his recent absences after a 2017 World Championship and its bitter epilogue.

His advancing age and coaching activities were moving him increasingly further from "hands on" kart racing, bringing him, in fact, closer to the role of coach. Even for the World Championship, although foreseen by his contract, doubts had not been completely dissolved.  Yet the CIK FIA World Championship has told us a completely different story. After the 3rd time in qualifying, Hájek changed pace in the heats, collecting 3 wins in as many outings. The Finale, then, was a winning cavalcade, one that has consigned the first Czech world champion to history.

«It's hard to believe,» commented an excited Hájek once off the podium. «It's an incredible joy. I'm very happy with how the weekend has evolved. We worked from different points of view to adapt to an asphalt that didn't have an exceptional grip; in the end the chassis and frame were impeccable. I want to thank everyone. And about next year, well ... »

What is the new CIK FIA World Champion KZ Patrik Hájek going to do next year? Find out in Vroom, the monthly magazine in newsstands in October.