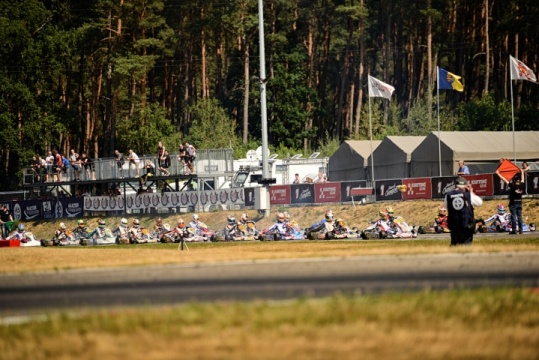 KZ - Federer out in front
At the end of the only qualifying session, this time with a dry track, Fabian Federer prevailed. His time: 52.392. Behind him, the other three first places due to the grid division: in second place overall, Marijin Kremers on pole for Group B, followed by Patrik Hajek and Simo Puhakka, for group C and D. Further behind, the CRG of Hiltbrand and De Conto in 15th and 17th absolute position, while Iglesias and Celenta are in P20 and P24. Tomorrow, the fight ensues in a series of heats.

KZ2 - Viganó ahead of the platoon
Close combat in KZ2 with Matteo Viganó first in 52.411, excellent time by the Italian, only two tenths ahead of Alexander Schimtz. The German gets the second absolute position, pole for Group B, ahead of Emil Skaras and Maximilian Paul in the top five. Last two spots available for the European Champion, Adrien Renaudin, and Vice Champ, Giacomo Pollini. Only 18th Emilien Denner, with Riccardo Longhi in P26. Here, too, appointment Saturday for the direct clashes.