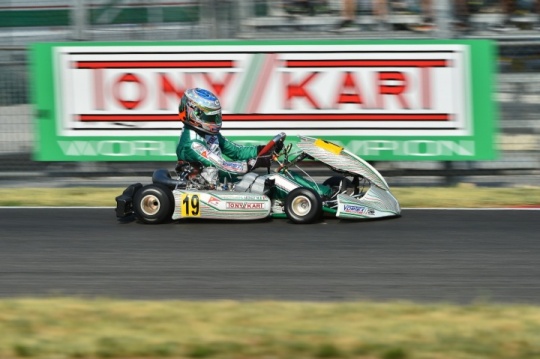 At the end of this long stop it is time for our drivers to get back on track: in the weekend 7-9 September, in fact, our drivers will be engaged in the Kart Grand Prix - Belgium, on the Belgian circuit of Genk for the CIK-FIA World KZ Championship and the CIK-FIA International KZ2 Supercup.

On the 1,360 meters of the track built in the Flanders region, the Tony Kart Racing Team will be on the starting grid with its own complete lineup. In the KZ master class all eyes are on Marco Ardigò, ready to gain a prestigious result after winning the 2018 WSK Super Master Series Champion Title this year.

At the wheel of their Tony Kart 401S Racer chassis powered by Vortex will get on track his teammates Simo Puhakka and Noah Milell, while in the KZ2 category it will be Matteo Viganò's task to realize the great potential shown in the last stage of the European championship held in July in Lonato. Alessandro Giardelli, Alessio Piccini and David Vidales will also be at his side.

The appointment of the CIK-FIA World KZ Championship and the CIK-FIA International KZ2 Supercup 2018, at the start on the Belgian circuit of Genk, can be followed from the Friday free practice through the live timing service available on the website http://www.apex- timing.com/live-timing/cik-fia/index.html . The qualifying heats and the finals on Sunday, however, are broadcast with the live streaming service on the official website http://www.cikfia.tv/.