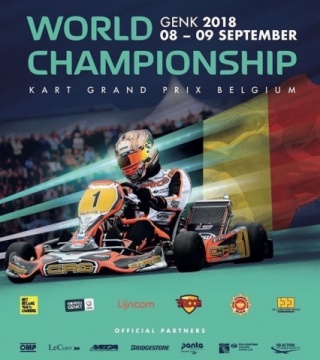 Author: Vroomkart International
Vroom is the official partner of the CIK FIA KZ World Championship in Genk.
The most important moment for KZ drivers is here: the World Championship, an event that crowns the CIK FIA season. This year the event takes place in Genk on the weekend of 9 September.

Since 2013, the Belgian track has been the racing season's most commonly used track, always in the CIK FIA calendar as a stage for the European, and since its first time in 2011 - when in KZ, Jonathan Thonon won with a pass on Yannick de Brabander just before the finish line-  the site of the World.

The track was built in 1983 and obtained CIK homologation in 1987. In the early years, the circuit, now called Karting Genk, was called Horensbergdam. Measuring 1360 meters, the circuit is the second longest of the KZ season after Salbris, 1477 meters, but compared to the French track, it presents a more technical driven section concentrated in the first two sections, followed by a faster intermediate that leads to the finish line. On the Belgian kart track, more than anywhere else, it is necessary to find the right compromise between maximum speed and driveability.


KZ - The Number One favorite for CIK FIA World crown is Paolo De Conto, the current World Champion and, above all, the last winner in Genk. Will the controversial epilogue of the European make De Conto even hungrier for victory? It won't be easy for De Conto, however, having to deal with a group of drivers among the most competitive in recent years. To make life difficult for him, in fact, there will be a fresh European champion Jorrit Pex, Marco Ardigo, Anthony Abbasse and Bas Lammers, plus the return of Jonathan Thonon. Eyes on outsiders Alex Irlando and Marijn Kremers, who on several occasions have shown they have the stuff to make the podium.

KZ2 - In the KZ2 Super Cup, instead, Giacomo Pollini will have the chance to respond to the continental success of Adrien Renaudin, with probable contenders being Emilien Denner and compatriots Alessio Piccini and Riccardo Longhi, 3rd last year in the Super Cup of Wackersdorf.