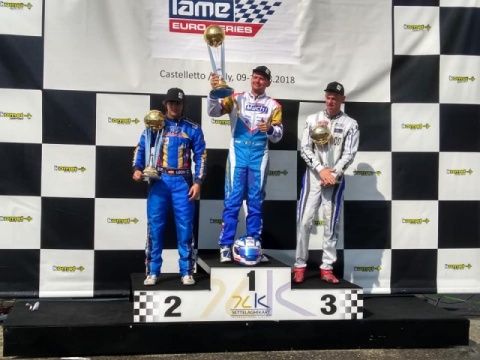 «The season start of the Iame Euro Series was really difficult for us», said Delré to Vroom. «In Salbris we didn’t have  the best engines because there were new cylinders and ignitions and we didn't know this. We had also some clutch problems, but we were able to finish second».

«In the second race in Mariembourg, the engines were good again but then it was warmer and we had some brake problems, but again we were able to finish second. In the third races in Wackersdorf we solved all problems and this was perfect, win in prefinal and final».

«Then in the last race in Castelletto everything went well until they decided to cancel the race and start again on Sunday because there were differences in the tyres. When we started again  with the other tires, I had really bad tyres. With these tyres I had no chance to race for the victory. We were able to finish fourth in the prefinal after a bad move from my rival for the championship. In the final I was leading the race until my rival for the championship decided to again make a strange move and he drove on me and I was not able to finish the race, but he also didn't finish the race and so I became champion».

Delré then went on to talk about the most difficult race of the season, that of Castelletto.

«The hardest race, for sure, was the last one because there were some strange decisions, like before the race the switch from soft tyres to medium tyres without telling me in advance, cancelling the race after a qualification heat because of tyres problem, then starting again and receiving really bad tyres... All things that I can understand from the organisation to try to make most of the drivers happy but that was really not in our advantage».

The new champion in X30 Super Shifter then spent a few words on rival Sten Dorian Piirimagi, rival to the end for the title but then disqualified precisely because of the wrong move against Delré.

«My strongest rival in the Iame Euro Series was for sure Sten Dorian Piirimagi. At the beginning of the season he made a perfect job and was able to take an advantage on me with all our problems. In Wackersdorf things changed and in the end in Castelletto I will say that the mentally strongest driver won the championship. But for sure he is a great driver and he will win a lot of other races».

«I have to thank a lot Mach1 for the great material, my dad for the great engines and the hard work and also, for sure, my wife who always support me. Without them, this results couldn't be possible!»