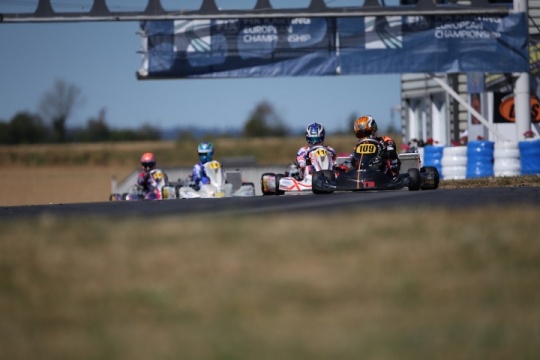 The deciding factor, in addition to the speed shown not only during the CIK FIA European races but also during the season's other events, was the sudden drop in competitiveness of Pedro Hiltbrand who, despite Janker's retirement in the last round in France, failed to grab his chance to attack when his rival dropped out.

«I'm really happy and I can guarantee that I would never have thought I could win after the retirement in Sarno », Janker said to Vroom. «Except for the race at Essay, where I never found the right pace, it was a really incredible start of 2018 where we won the Winter Cup, the WSK Super Master Series and the CIK FIA European Championship».

«To complete the work done, only the Kristianstad World Cup is missing, but it won't be easy. Being a single-race competition, it will be fundamental that everything is perfect from Day One. I like the track a lot, but lately we have lost a bit of polish and for this we will have to work hard to get back to the top».

The last statement by Janker does not go unnoticed, his "fears" seemingly related to the French weekend where, against a Dexter Patterson dominated with the same material, the new champion showed some difficulties in adapting. But in the end, Janker wears the crowns. And that's what counts.