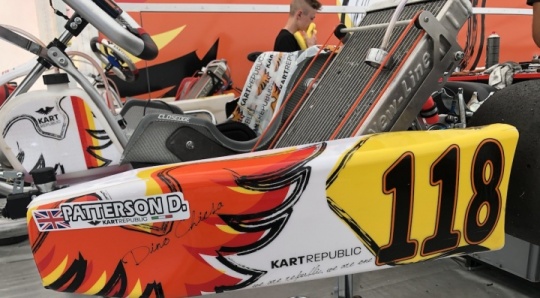 Headlights focused on the classes for the last European weekend of Junior and Senior categories. As usual, Friday time-attack for all drivers engaged on the demanding French track.

OK – Patterson at his first with Kart Republic

The Briton of Kart Republic, Dexter Patterson, puts in the best overall performance with 45.198 at the end of the session. Time valid for the absolute pole position and for the best lap in Group A; behind him, Harry Thompson with a +0.171 sec gap (1st in Group B). Third overall and 1st in Group C Kas Haverkort with 45.408. To complete the top five positions are Lorenzo Travisanutto and Jonny Edgar, respectively the best in Group D and E. 6th Nicklas Nielsen, the best on Group F.

OKJ – Bedrin open the weekend in the best way

There are six pole positions for the OKJ, with a huge turnout of drivers subdivided from group A to group F. Nikita Bedrin made the best lap in 46.724, just +0.042 sec ahead of Victor Bernier. Kai Askey with the third absolute time trial, secured the pole for group C. Same for Gabriel Bortoleto and Paul Aron, respectively at the top in group D and E. Closing with the sixth absolute time is Tymoteusz Kucharczyk.