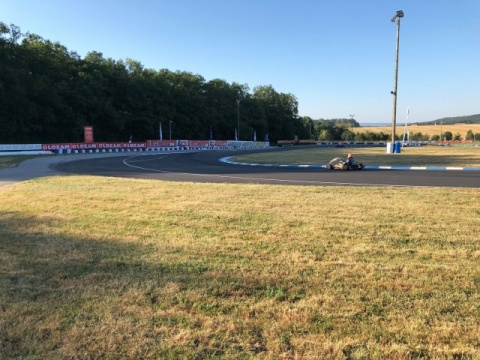 Author: Vroomkart International
At Essay the European CIK FIA championship will be decided in the OK and OKJ direct-drive classes.

This weekend, after more than two years, the CIK FIA Circus returns to Essay where the titles of European champions for the OK and OKJ classes will be awarded.

The last time a CIK FIA competition took place on the track in Lower Normandy was 2016, but it then featured the KZ, KZ2 and Academy classes; for the direct-drive categories one must go back to the previous homologation, the KF, staged here with the world championships in 2014. On that occasion there was an overwhelming dominance by Ricky Flynn Motorsport, who took home the world championship in KF, with Lando Norris, and Enaam Ahmed in KFJ.

As for 2018, the situation in OK is very different. This time, in fact, the fight for the title is a contention between Hannes Janker and Pedro Hiltbrand, with the latter called in to do overtime to recover the 19 points that separate him from the German. Janker has a roadmap marked with two victories and a DNF, the latter a "black mark" that could be rendered inconsequential thanks to the worst result being however cancelled in the final tally.

Behind the two, a surprise: Juho Valtanen, 12 points from CRG's Spaniard, Hiltbrand. Valtanen, at 46, leads a procession enclosed in 3 points with David Vidales, 4th at 45, and Roman Stanek, 5th at 44. More detached in 6th is Zane Maloney with 38 points.

All still in contention in the Junior class, Paul Aron's overall supremacy, especially with Sarno and Ampfing, has allowed the Estonian driver to deservedly take the leadership of the CIK FIA European Championship. First place (69 points total), which he will try to maintain until the end of the European adventure. Deadly for his direct rivals Gabriele Minì and Gabriel Bortoleto, should he put in one of his usual weekends.

The Italian, a real surprise, that being found confirmation throughout the season, had undermined the first place, thanks to the stage at PFI, where he obtained the lead of the classification. A result that later completely changed, thanks to the technical problem in Germany. Fifty-two points for Minì, the same as Gabriel Bortoleto, first of the CRG drivers. The gold and green have not yet won this year, however, still managed to bring home important results, especially in the Saturday heats, even more at Ampfing. Closing the top five, of note Kai Askey and Dilano Van T'Hoff, already in the headlines in the previous stages. The story of the CIK FIA OKJ European Championship is, therefore, a story still to be written, ready to take shape definitively, starting today (Friday 3 August), then moving to Saturday in the heats, ending with the grand finale on Sunday.