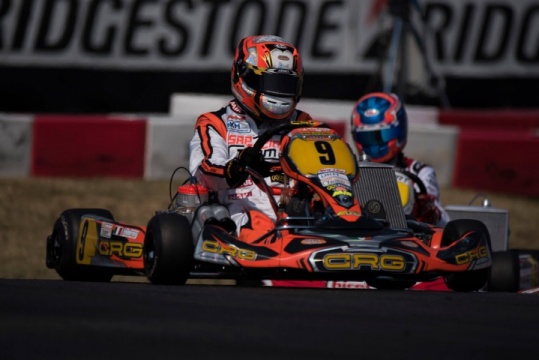 Author: Vroomkart International
A rollercoaster post-race takes away the victory and the title from Paolo De Conto, forced to "abdicate" in favor of Jorrit Pex. Federico Albanese is the 2nd Italian to win a stage of the Academy.

In the end, the winner's cup was Fabian Federer's, who on an especially torrid Sunday only stumbled ... as he climbed onto the podium. Another stumble, but much more painful, instead, saw Paolo De Conto take the fall when, after scoring the double title race, received a penalty of 10 seconds for a bad manoeuvre against the then leader Francesco Celenta.

Starting from 3rd place, De Conto took 3 laps to overtake Marijn Kremers and launch his pursuit of Celenta. The latter stayed ahead until the 8th lap when the CRG #1 of the reigning champion, crossing the trajectory, dove inside the penultimate corner. The two karts came into contact and De Conto's move was noted by the stewards, who exposed the “under investigation” notice against him two laps later.

Now ahead, De Conto greeted his rivals and went on to win in an authoritative manner. Surprises continued behind him; Celenta was forced to retire on lap 18 and this favored Fabian Federer, who climbed to P2, and Marjin Kremers, 3rd.

Thanks also to a negative weekend of temporary leader Jeremy Iglesias, only 14th on the finish line, De Conto was able to savor the (momentary) joy of the second consecutive title in KZ. A few hours after the ceremony, however, the cold shower: a 10-second penalty dropped the Italian to 11th position to the benefit of Jorrit Pex whose 5th place was enough to award him the second continental title in the premier class after his first in 2012. The penalty of CRG's top driver also benefitted Federer, awarded the race win, of Kremers who climbed into 2nd and of Ben Hanley, who returned to the podium of the Brescia track after winning the Winter Cup.

On the podium of the Academy Trophy, the Italian anthem resounds thanks to Federico Albanese who, after finishing 2nd in the heats ranking, won in front of the Brazilian Guilherme De Figueiredo and the Moroccan Suleiman Zanfari, thus becoming one of the contenders for the title to be decided in September on the 1360 meters of the well-known Belgian kart track of Genk.