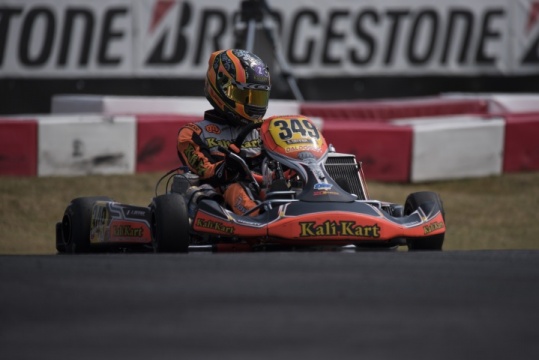 Author: Vroomkart International
Twenty-five high voltage laps to decide the European Champion. Emilien Denner wins the race, Renaudin returns home as Champion, Pollini beaten by a whisker.
The KZ2 salutes the European with a thrilling last race, decisive for the category's final standings. A long-distance fight between Renaudin and Pollini, contending the trophy to the last, won by the Frenchman by only nine points.

Starting grid - Denner pole in front of Palomba and Pollini
Last three heats in the morning, useful for deciding the starting grid, victories obtained for Skaras, Luyet and Longhi. Despite the second place finish in his heat, Frenchman Denner starts from pole position; next, Palomba from P2. Top three completed by NGM's driver, Giacomo Pollini, followed by Viganò and Rasmussen in top five. Only ninth Longhi, however, winner of four out of five heats.

Final - Denner uncatchable, Renaudin smiles
Lights off, Giuseppe Palomba is best off the start, later defending his position again from Denner, still first after a few turns. With Pollini stable in third position, a compact group for the first lap of the final. Viganò, fourth to start, dives past Pollini on the second lap; behind Longhi making a furious comeback from ninth place. Four laps of fire, completed with a close encounter between Rasmussen and the leader of the classification Renaudin. Emilien Denner, now practically alone, is set for success, one never in doubt during the final. As mentioned, the real star, Riccardo Longhi, lap after lap, pass after pass with a series of record laps. Great move on Pollini, overtaken at the hairpin for fourth place during the twelfth lap. Maneuver then photocopied at the nineteenth lap, this time against Viganò for third place and final podium.

With the show now nearing the end, the only interest is for the final classification and the Renaudin-Pollini battle. The Frenchman is not at his best, first surpassed by Piccini and then by Schmitz and Vidales, closing the race in P9. Position that, in any case, brings home the title of European Champion, counting the fifth place of Pollini, vice champion at his debut. Only nine points of difference between the two rivals. Emilien Denner triumphs with two seconds on Palomba and Longhi; just off the podium: Viganò.