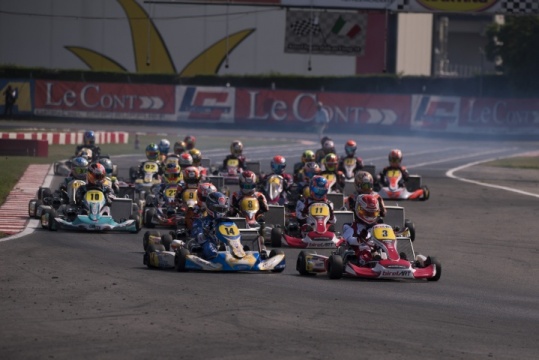 Author: Vroomkart International
Scorching Saturday for all the drivers at the Kart GP of Italy. Direct matches already decisive for KZ, KZ2 and Academy.
On Saturday, as usual, the many hard-fought heats in different categories competing with clear pointers to the front-runners for the final on Sunday, July 15.

KZ - Head to head for Kremers and Celenta
At the ready, it's a two-man fight in the premier class. Two of the three heats done. After yesterday's pole, Francesco Celenta takes the first heat, a 10th of a second on Kremers. Kremers retorts by winning the second heat, Celenta second. A virtually identical score  makes for an uncertain Sunday. Good third places for Pex in first heat; De Conto in the second. Consistent Top 5 positions for Mirko Torsellini, with Iglesias and Ardigò lurking behind, fixed in top ten. Last fight tomorrow (Sunday 15) at 11.35, with the final scheduled at 15.30.

KZ2 - Fight to the last between Longhi and Denner
The KZ2 program is definitely more substantial, thanks to twelve heats. Among the favorites of the weekend, the two pace-setters of the day, Longhi and Denner, both with three successes to their names. Of note, a retirement for Longhi during one of the last direct matches. Behind them, the second duo Pollini-Palomba with two wins each. Renaudin and Cozzaglio each win one. Four hot names for the title fight, this and much more in the three heats of tomorrow (h09.55, h10.15 and h10.35), before the final at 13.25.

FIA Academy - Albanese vs Meguetounif: 2-2
Four direct matches for the Academy's youngsters, two winners of the day, the summary of the second round of the FIA Academy to date. As "homeboy", Federico Albanese grabs two wins on the competition. Close behind, Meguetounif, yesterday's pole man and winner of two heats. Perfect score, here too, that sets the stage for Sunday's duels and standings. Final set for h14.30, preceded by the last two final heats (10.55h and 11.15h).