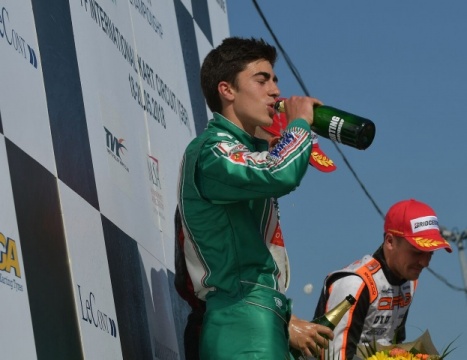 Author: Vroomkart International
David Vidales takes stock of CIK FIA's European karting season.
«The first part of the season was complicated. In the wet there were no problems, but in the dry there was a lack of speed. However, we are working hard to get to 100% for the European» said David Vidales on the Tony Kart situation  after the Muro Leccese round of the WSK Super Master Series.

In fact, there was a considerable step forward and the Spaniard, involved in both the direct drive and in KZ2 with the colors of the Tony Kart Factory Team, is currently only one point from 3rd place in the general classification of the European OK Championship.

«The situation has improved a lot. We have worked really hard» commented Vidales. «In the first races, as I told you, we had some problems but now we are very competitive».

«In the European OK, I am currently 4th at one point from 3rd. Too bad for the first race in Sarno where we were very fast, but we were forced to retire. At PFI, however, we obtained a good podium. Considering that we can take away one result, we are still in contention for the championship».

As mentioned, in 2018 Vidales is in OK and KZ2, the Spaniard satisfied with the potential shown in the first stage of the European Championship in Salbris.

«Salbris was my first race in KZ2. Considering that I had only done two days of practice before the race, I immediately went very fast, even winning a heat. Of course I still have to perfect several things, but I did not find difficulties in the passage. In the end, it's enough to change the chip».

«Old-fashioned tracks I like very much, even if I have to say that Ampfing is not my favorite. I also think that the German track is not suitable for a European, not so much for the circuit itself, but for the infrastructure. Ampfing or Salbris? Salbris, without a doubt».