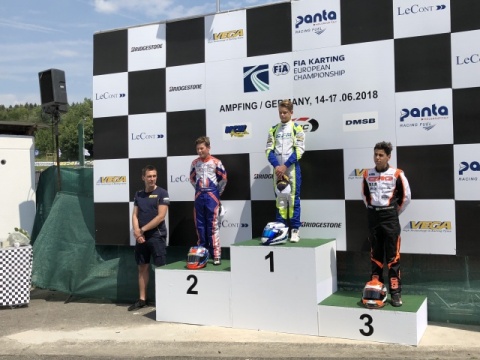 The curtain falls on the penultimate European OK / OKJ event. On the tortuous Ampfing track, Paul Aron and Hannes Janker celebrate their second wins of the season.

The on-track show, rivalry and turnarounds do honor to the third round of the FIA season, racing at its best. An old-fashioned layout, as is Ampfing's Kartbahn, left no room for boredom.

OKJ - With three wins, a third and a second place, Gabriel Bortoleto monopolized the number one spot on the grid. An important result for the Brazilian, necessary for him to get back into the race for the general standings. Behind him, Hadrien David, back on track this weekend, finishes just a step from the top, followed by Aron.

A situation completely overturned at the start with Paul Aron, able to immediately take second place from David. Incredible pace the Estonian's, unmatchable, and immediately in first position after only two laps. The overtaking at the hairpin, the last curve before the finish line, turns out to be the Estonian's only "effort", good for running ahead and triumphing alone out in front. A great fight behind him, and an interesting battle for the podium between Bortoleto, David, Griggs (who started fourth), Minì and Smal. The first to make his move is Griggs with the winning move on Bortoleto. Once again, Minì echoes the move, pass after pass to 4P.

Triumphal ride interrupted, however, soon after for the Italian, betrayed by a technical problem at the nineteenth of twenty-two laps. Battle with Bortoleto therefore denied and leadership lost, despite the positive weekend. Last thrill, Smal overtaking David for fourth place. Paul Aron then crosses the finish line first, returning to the first position of the general classification, after Sarno.

OK - 0 penalties, which means victory in all the heats, guaranteed the pole position to Hannes Janker, already poleman after Friday's Qualifying Practice. The German split the front row with Lorenzo Travisanutto, while the second row went to Juho Valtanen and Zane Maloney.

In the Final, on the go, Travisanutto takes the lead: able to exploit what Janker later calls a "momentary loss of power", which slowed him down at the beginning. Not the best of starts for Juho Valtanen, too, who eventually drops to 7th.

Meanwhile, Janker's momentary misadventures and Maloney's overtaking against him helped Travisanutto, who managed to put a big gap between himself and the Barbados driver. Advantage that was then reduced by Maloney after half-time when it looked like he would be able to close the gap completely and attempt the assault on the leadership.

With 4 laps from the finish line, the first of two surprising events that marked the final part of the race, that is, Janker passingt Maloney. Janker thus brought himself behind Travisanutto, both on Kart Republic / Parilla (of the TB Racing for the German and official for the Spilimbergo driver).

Just steps from the finish line, when the checkered flag was already flying, the second surprise. Travisanutto, now launched towards the first triumph of this European, sees Janker race by, thus taking a resounding victory over Travisanutto and Maloney.

It's Hannes Janker second win, after his win at PF International; in addition to putting him to the top of the standings, he has also become the number 1 candidate for winning the title.

The next event is Essay for the fourth and final round of the European FIA Karting 2018, which will be staged on the French kart track at the weekend of 5 August.