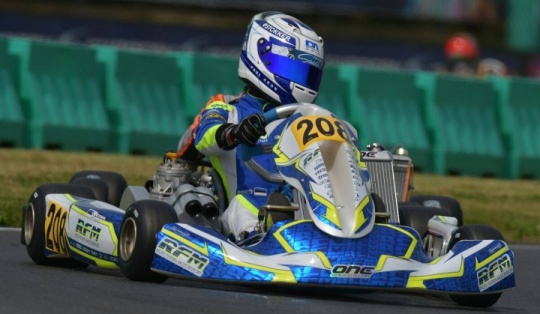 OK - The best time went to Janker, who stopped the clock at 41"775, followed by Lorenzo Travisanutto who will start on pole for the heats in Group B. 3rd, and leader for the C, is Harry Thompson, followed by Juho Valtanen and Danny Keirle, the front runners in groups D and E. The 6th spot, finally, guarantees Hugo Sasse a spot on pole in F.

Surprising is P33 of Pedro Hiltbrand, current leader of the General, who, together with David Vidales, 31st, are expected to make up lost positions in tomorrow's heats.

OKJ - In light of many participants, there are six groups. Pole position from group A to group F with Paul Aron, again Junior leader. The Estonian, already master of Sarno, stopped the clock at 43.204, ensuring the best overall performance. Behind him, team-mate Kai Askey with a gap of +0.180 sec. A re-found monopoly for the two, ready to defend against Nikita Bedrin (43.481), Luca Griggs (43.485), the leader Gabriele Minì (43.506) and Sebastian Ogaard (43.512), respectively pole men for group C, D, E and F.

Hot phase scheduled from tomorrow with most of the heats, more than ever decisive for OK and OKJ, again on stage after the British weekend, now gone.