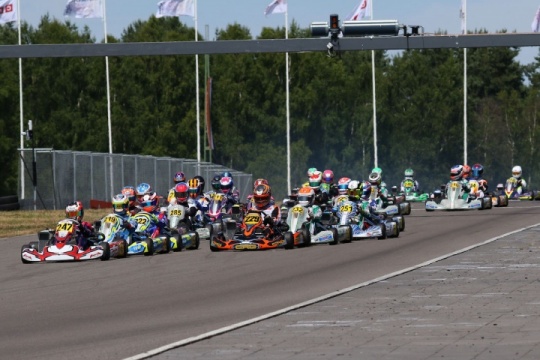 Author: Vroomkart International
Seven weeks after its magnificent premiere, the Rotax MAX Challenge Euro Trophy entered its second round from June 8th to 10th, which marked half of the season.
The European Rotax elite travelled to Scandinavia and the 1,231 metres long Asum Ring in Kristianstad, Sweden, welcomed more than 110 participants and delivered thrilling races in the categories of Junior, Senior, DD2 and DD2 Masters under the best weather conditions. In the end, the stop in Sweden not only ascertained new winners, but also narrowed the circle of potential favourites to get the title.

Opening event winner Mike van Vugt (JJ Racing) continued in Kristianstad where he left off at Genk: at the top of the 39 Junior grid. In qualifying and in all heats, the Dutchman raised the bar, putting himself in the favourite position for the first final. The champion leader was unbeatable. After 14 laps he crossed the finish line first, thus celebrating the third victory in a row. Nevertheless, the race was no walk in the park for the youngster, whose strongest competitors Kobe Pauwels (Daems Racing Team) from Belgium and James Wharton (FA) from Australia saw the chequered flag only a blink behind.

In the second final, the tide should turn: this time Mike van Vugt had to back down and he settled for second place behind Kobe Pauwels. In the daily classification, however, the Dutchman, still gained enough points to take the victory, thus defending the lead in the championship. Kobe Pauwels took second place on the podium ahead of James Wharton, who again finished third in the second race.

With 44 pilots the seniors marked the biggest grid during the second round of the RMC Euro Trophy. Above all, the Finn Axel Saarniala (Kathala Sports) set the fastest time in qualifying. After the heats, however, he had to vacate the top and left it to Mick Nolten (Exprit). The Dutchman won all the heats and left nothing to chance in the first final, too. Starting from pole position, he extended the lead to over four seconds and ultimately won ahead of Axel Saarniala and the quick Swedish girl Mathilda Olsson (Strawberry Racing).

The local heroine made her big appearance in the second final, takin advantage or her home match and celebrating an impressive victory ahead of Mick Nolten and Kalle Astrand (KR-Sport) from Sweden. In the daily classification, however, Mick Nolten prevailed with 45 points in front of Mathilda Olsson (41 points) and Kalle Astrand (25). Meanwhile, Hannes Morin (Dan Holland Racing), who came to Kristianstad as overall leader, experienced a disappointing weekend. The Swede had some ambitious plans for his home game, but landed only tenth in the daily standings, which made him lose the top spot to Mick Nolten.

DD2: Mortensen wins without a win

The competition was extremely balanced in the grid of the gearbox category. Especially the “northern lights” were in the driving seats. The start was made by Norway’s Nikolai Stien (Team Pro-Karting) who had the lead. He led the qualifying but slipped back in the heats. Thus, local hero Alexander Dahlberg (KH Racing) took the lead. The Swede conquered pole position for the first final but without luck. A time penalty threw him back to eighth place in the end. Ville Viiliainen (JTL Racing) lived up to his name of the “flying Finn” and boosted himself to the victory. Second place went to first-round winner Martin Mortensen (RS Competition) from Denmark ahead of Germany’s Max Fleischmann (FM Racing).

In the second final Alexander Dahlberg struck back. With a strong performance and the fastest lap of the race, the Swede made his way back to the top, putting Martin Mortensen and Nikolai Stien in the in the lead. In the daily ranking Martin Mortensen was allowed to cheer at the end. Thanks to his constant performance, he gained the most points and consequently extended the championship lead. The podium was complemented by Ville Viiliainen and Alexander Dahlberg. Nikolai Stien finished fourth ahead of Max Fleischmann on fifth place.

In the special classification of the DD2 Masters pilots, Christophe Adams (Sodikart) was unbeatable. The Belgian was always at the top and ultimately celebrated winning both finals, he consequently celebrated the victory in the daily ranking. Behind the veteran, Austrian Manuel Tenschert (Daems Racing) took second place ahead of Patrick Weinstock (FM Racing) from Germany.

For its next stop, the Rotax MAX Challenge Euro Trophy heads for Austria from August 3rd to 5th, 2018. At Speedworld in Bruck, the championship heralds the end of the season and may even be the first preliminary decisions in the championship – right in front of the in the outskirts of Vienna.