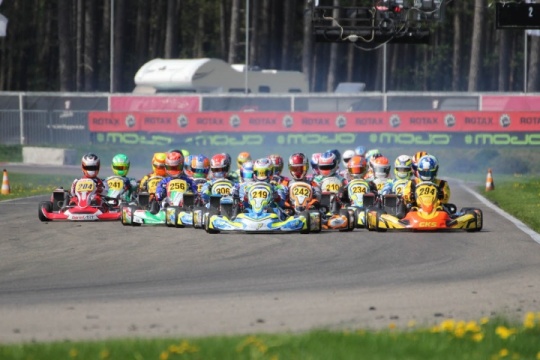 The European Rotax season, marked by the beginning of the new promoter's mandate, Meik Wagner's Camp Company, immediately began in the best possible way, registering a significant increase in the number of registered drivers.

Vroom, with the kind collaboration of the Rotax administration, has carried out a survey that will be published in full in a dossier in the next issue of Vroom International, Issue 205, of which we have decided to offer a preview.

Taking as a reference the two second stages of the 2017 and 2018 seasons, that is, Salbris and Kristianstad, there has been an increase of 62 participants.
Sports-wise, what can we expect in Sweden? Let's look at the four classes involved.

Junior MAX - In Belgium, the local Kobe Pauwels and the Dutchman Til Van Sem divided the victories to be won, but a more regular Mike Van Vugt is currently in first place in the standings. Van Vugt's is a story already seen in races with the double finals- format, namely that the strategy that pays off is not the one-shot, but consistent results. If the adversaries do not adapt soon, Van Vugt could end up building a substantial advantage in the future.

Senior MAX - Hannes Morin and Max Timmermans, winners of the two Finals, are competing for the championship lead with Morin leading by 4 points. The others are further back with Mick Nolten next at -29. The Swedish race is sure to answer the question predominant in Senior: will it be a two-man race between Morin-Timmermans, or was the Genk race just an aside?

DD2 MAX / Master - Martin Henckel Mortens in DD2 MAX and the duo Slawomir Muranski and Christophe Adams in Masters have each won in their respective categories, so are sure to be looking at top spots in Kristianstad with confidence.

The event officially starts on Friday with 6 free practice sessions for each category, while Saturday's schedule includes the Official Qualifying and the Heats, which will determine the starting order for the Sunday Finals.