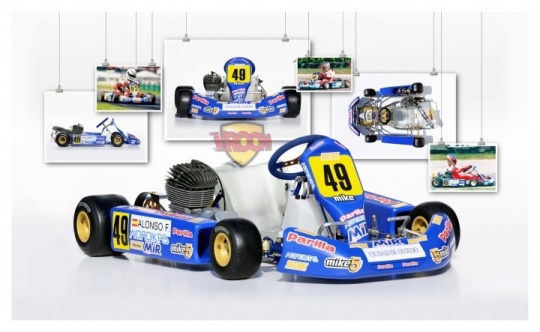 Author: Vroomkart International
The Mike Wilson / Parilla of Fernando Alonso, from Vroom n.342.
As a veteran kart afficionado and lover of the Nineties of the four wheels, the revival of vintage and retro karting convinced me to throw myself on my own personal restoration project. The end of the last millennium offered the most beautiful kart-engine combos, so finding the right package was the first step.

Why the MW / Parilla of Alonso - After seeing real "works of art" in terms of restoration with Swiss Hutless, Tony Kart, PCR, CRG and Tecno, I tried extra hard to find something a bit less common. The choice fell on a MW Mike-2 found in New South Wales in Australia. The kart wasn't in bad condition; added to this, it was an opportunity to restore a kart built by one of the greatest figures in karting, Mike Wilson, a kart driven to success by one of the all-time great drivers, Fernando Alonso, all of which made the thing irresistible for me.

Prizewinning - With this MW / Parilla model, Alonso won the Italian and Spanish Inter-A titles in 1997, repeating the win of his own home title (Spanish) the following season, which was further embellished by the place of honor in the European Championships. This is precisely the vehicle that I decided to restore. A complete restoration from top to bottom, bolt after bolt, which took about 6 months to do, spent to find all the necessary components and the final touches.

The restoration – It all started with a complete stripping, directed downwards, a powder coating, followed by re-synchronization, zinc coating, and the restoration of the bottom and the brakes. Once the foundations were laid, the next step was to find the parts: the right wheels and rims came from Germany, the pedals and steering wheel from Switzerland, the Parilla of '98 from France and, last but not least, the extraordinary chassis and the adhesive kit made by Glenn Davidson at Reverse Graphics.