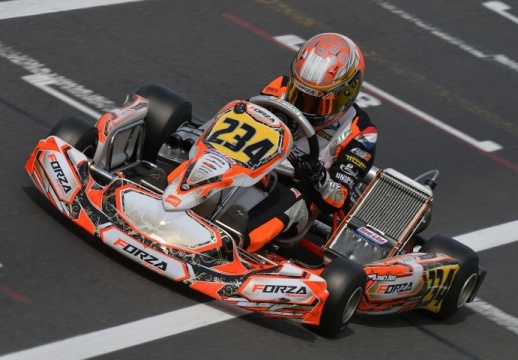 Author: Vroomkart International
Yet again another thrilling final ends the OKJ weekend. Dilano Van T'Hoff wins in front of Victor Bernier and Gabrile Minì, now leader of the classification.
As usual, the Juniors put on a great show. Kirill Smal jumps from third at the start and immediately takes command in turn one. Behind him, another great start by Gabriel Bortoleto, while Dilano Van T'Hoff, pole man after the heats, is slower off the mark.

After the first-lap crash, with four drivers out of the race, focus is on the fight for victory, until then in the hands of Smal. The Russian, making good on his great performance on Friday and Saturday, immediately tries to escape ahead of Bortoleto and Bernier, fighting each other at the tunnel exit.

The Brazilian, caught out by tire wear, then had the worst even on Van T'Hoff, still inside after the tunnel for third place.
A hard-fought race, with nerves of steel, for all the top positions, high tension on the fifth lap with a decided Victor Bernier making his move on Kirill Smal for the first position, a little further back, good also Gabriele Minì for the fourth place.

A match between trios fought out for most of the race with Bernier, Small and Van T'Hoff in one group and Minì, Bortoleto and Brinke in another.

Another drop in performance, this time for Smal and yet another undecided brawl, in this case with Van T'Hoff. Fight that does not materialize for the Dutchman, until the Russian exits the track  excluded from the race, for trying to fix the nose cone after the finish line.
With Bernier now alone and Van T'Hoff at a safe distance, the focus shifts to the back with the assault on the third step of the podium.

With only a few laps to the end, Ten Brinke starts making his moves on Gabriele Minì. The Dutchman, threatening at every opportunity, then takes advantage of a too-wide exit of the Italian, and pulls Alex Lloyd ahead with him. Final fight between the two by an array of crossed trajectories with the Italian always on the attack for a compelling brawl that brings other players into the fight, starting with Gabriel Bortoleto.

Last incandescent lap and an icy Gabriele Minì makes his decisive attack that wins him a place on the podium in the very last few turns available. In front, Van T'Hoff and Bernier, in second and first place. The Frenchman is then penalized by the stewards for not having correctly respected the starting procedures, the win placed into the hands of Dilano Van T'Hoff.

Negative weekend for Paul Aron, penalized for spoiler release. First in the standings: Gabriele Minì with 45 pts, 36 for the Estonian, and Van T'Hoff with 35 pts.