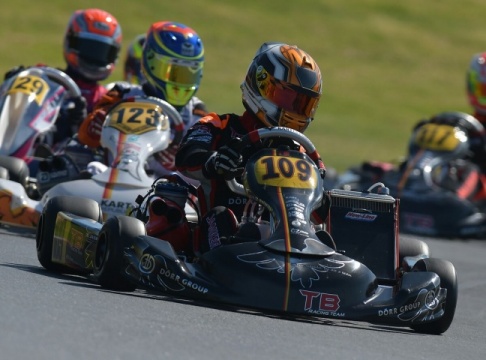 Author: Vroomkart International
Everything escalated quickly after the checkered flag at PF International, we had to wait a long time before hearing the stewards’ decision. Lorenzo Travisanutto, the one who arrived first, was disqualified and handed over the victory to Hannes Janker.

Lorenzo Travisanutto, after the crash at Sarno, redeemed himself by ending in first position the second race of di European OK at Paul Fletcher International.  Starting from the third position on the grid, he waited a couple of laps before attacking the poleman, Mattia Michelotto, and Hannes Janker. Danny Kierle also gained from the attack during the third lap, indeed he got the second place. Michelotto and Janker concluded the race in third and fourth place.

Then no more attacks for the first three places occurred, only Pedro Hiltbrand tried to overcome Keirle in order to have someone between himself and David Vidales, a fellow countryman. The three of them battled, but in the end Keirle got on the third step of the podium, overcoming Hiltbrand.

Meanwhile, Olivier Hodgson was coming back from the 16th place on the grid, catching Keirle and Hiltbrand but in the end he got a penalty for losing the spoiler. The Kart Grand Prix of Great Britain ended at the end of the 22nd lap, but the stewards took some time to analyse the situation.

The stewards decided to disqualify Lorenzo Travisanutto because “The Driver mentioned above tried to replace his Front Fairing after the Chequered Flag was waved”. The podium consisted of: Hannes Janker, David Vidales and Pedro Hiltbrand.

Hiltbrand leads with 51 points, 9 more than Janker and 16 more than Roman Stanek, who arrived 21st today after problems at the start.