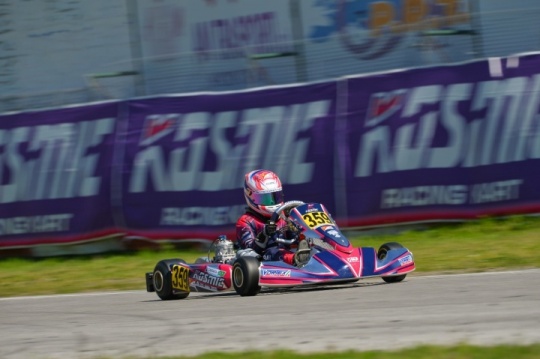 Author: Vroomkart International
The Kosmic Racing Department will be engaged in the weekend of May 17th-20th on the PF International track for the dispute of the second round (out of four) of the FIA Karting European Championship reserved for OK and OKJ categ
Four weeks have passed since the FIA Karting European Championship debut for the OK and OKJ single-speed categories at the Naples International circuit of Sarno, and now it's time to get back on track. The Kosmic Racing Department, in fact, is ready to sharpen its weapons on the English PF International track, theater on the weekend of May 17th-20th of the Kart Grand Prix - Great Britain, the second round scheduled for the 2018 calendar.

Located east of Nottingham near the town of Brandon, the PF International track is able to test the talent of the main protagonists of international karting: among these also our drivers will be lined up at the starting grid, first of all Roman Stanek, winner in OK class on the occasion of the first opening round in Sarno. At present, the Czech driver is at the top of the drivers' standings and on the occasion of the British weekend he aims to further increase the gap between himself and his rivals.

Next to him in the Senior class there will also be Viktor Gustafsson, while in that Junior class David Hadrien and Rafael Camara will be called to give the best of themselves at the wheel of our Kosmic Mercury S chassis powered by the Vortex engine, in order to improve the result gained one month ago on the Naples track. In addition, a new driver will join them: it is Jak Crawford, Florida Winter Tour 2016 champion in the Mini Rok class who will have the opportunity to show his driving skills from the American national races to those of international level.

The race at the PF International circuit, seat of the second round of the CIK FIA European Championship for OK and OKJ categories, can be followed thanks to the live timing service available on the website http://www.apex-timing.com/live-timing/cik-fia/index.html since the Friday free practices. The eliminatory heats and the finals on Sunday, however, will be broadcast live on the http://www.cikfia.tv/ website.