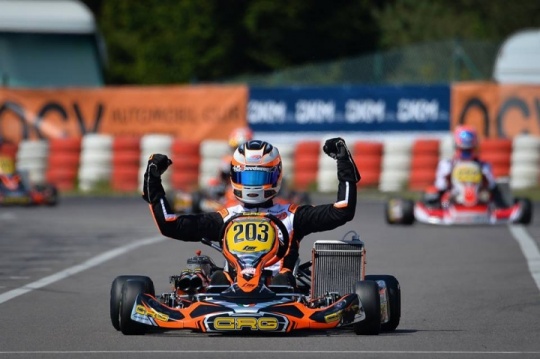 Press Release by: CRG
Stan Pex and Tornqvist claimed one win each in KZ2, as Jorrit Pex confirmed his classification lead. Denner secured the victory in KZ2 Cup and kept the lead in the standings. Good performance for Haverkort and Rosso in OK, while Scionti had a positive debut in OK-Junior.

The second round of the DKM Championship took place in Wackersdorf and CRG has been again among the main protagonist of the German series after the opener held in Lonato in mid-April.

KZ2. Pex (CRG Holland), Fabian Federer (SRP Racing Team) and Alessandro Giardelli have come to the fore in KZ2 since qualifying practice, when they locked out the top three of Group 1, as did CRG Holland’s Benjamin Tornqvist-Persson and Stan Pex that were the fastest of Group 2. CRG dominant run continued in the heats and in the Finals. Race-1 victory was taken by an excellent Stan Pex, as Federer was third and Jorrit Pex fourth, while Tornqvist was 13th and Giardelli 16th. Variable weather conditions rewarded Tornqvist’s technical choice in Race-2 and helped him to secure the victory on slick tyres, leading another CRG driver, Toni Tschentscher of SRP Racing. Stan Pex (on rain tyres) in fourth place, and Federer in fifth, managed to get again on the five-step podium of DKM. Jorrit Pex was seventh and confirmed his classification lead following the results obtained in Lonato. Giardelli was 18th instead.
CRG colors dominate the Championship: Jorrit Pex is leading at 88 points and is followed by Fabian Federer at 82 and Stan Pex at 74.

KZ2 CUP. After the KZ2 Cup full haul of Emilien Denner on Kalì-Kart chassis in Lonato, the young French driver has been the great protagonist of the second round in Wackersdorf too. He won in fact Race-1 after claiming the pole position. Denner was unfortunately forced to an early retirement from Race-2 due to several contacts, but his overall scoring in Wackersdorf allows him to keep the classification lead at 110 points, as Race-2 winner Alessio Curto follows him at 89 points.

OK. As in the case of Lonato, Kas Haverkort and Andrea Rosso put in a great performance in OK at Wackersdorf. Team Zanardi’s Haverkort has been very quick since the beginning and secured the third place in Race-1 and the second in Race-2. Rosso had  to recover some lost ground from qualifying and heats and managed to gain P7 in Race-1 and a good P3 in Race-2, behind Haverkort. The two finals were respectively won by Thompson and Tauscher. Thompson is currently leading the classification at 103 points, Haverkort is third at 79 and Rosso seventh at 42.

OK-JUNIOR. Enzo Scionti, at the debut on the chassis of the Italian company, displayed a good shape since the beginning in OK-Junior and eventually was the best of CRG drivers taking the sixth time in qualifying before ending heats in 21st position. Regarding the other CRG drivers, Leonardo Bertini Colla was 16th in the heats, while Alfio Andrea Spina could not qualify for the double final despite an encouraging P24 in qualifying. Bertini Colla was 9th and 17th in the two finals, while Scionti had to retire early from Race-1, but bounced back in Race-2 ending 12th. The two finals were won by Sebastian Ogaard and Edoardo Ludovico Villa. Kai Askey is currently leading the classification,  Leonardo Bertini Colla is ninth and Alfio Andrea Spina tenth.

DKM will resume next June 3rd from Ampfing (D),  before moving to Kerpen (D) on July 29th and Genk (B) on August 26th. Complete results are available at www.kart-dm.de/en/home/. 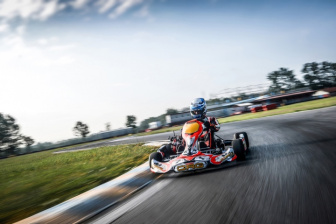 PREVIEW OF THE ENTRY LEVEL PROJECT BY CRG AND BRIGGS & STRATTON