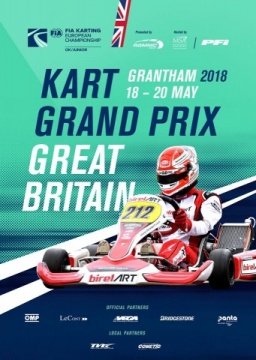 Author: Vroomkart International
Second European appointment all ready and set to go for the OK and OKJ racers. After the first race in Sarno, it's now Britain's turn to host the CIK FIA show.
A beginning with a bang, the new season of the 2018 FIA European Kart Championship. Results as expected in Sarno for the drivers in direct drive. All eyes on Stanek (OK) and Aron (OKJ), after their Italian successes.

OK – An intense weekend, it literally launched Kosmic's home ace to the forefront. Roman Stanek will start as a favorite during the PFI weekend (Grantham, GB). First place in the standings, ahead of CRG man-to-beat: Pedro Hiltbrand. The Spaniard, after the failed victory in KZ, on the occasion of the weekend of Salbris (FRA), is expected to take up where he left off. Third force in the field, the daunting “rookie”, Harry Thompson, the home player. The Brit will, of course, try to make his mark on his home track. Others expected to do well, four more Brits, track experts. Watch out for PFI specialists, Dexter Patterson and Danny Keirle, OK and OKJ World Champions in 2017. Equally dangerous, Callum Bradshaw and Jonny Edgar. Italian hopes are placed in Leonardo Marseglia, (sixth in Sarno), Alex Irlando, Andrea Rosso, Luigi Coluccio and Lorenzo Ferrari. Sure to make up for lost ground: David Vidales, Lorenzo Travisanutto, protagonist of the spectacular crash, without consequences, on the Naples International Circuit.

OKJ – Having seen Paul Aron at the season's first outing, stopping him seems almost unthinkable.. In Italy, the Estonian, impeccable throughout the weekend, dominated from the first to the last session. The thirty-five points in the standings provide a good margin on Gabriele Minì. The Sicilian, a splendid second at his debut, will try to repeat himself. Same goes for the Briton Kai Askey, already on a roll. The Ricky Flynn Motorsport platoon will also count upon Conrad Laursen, a step from the podium in Sarno before, alas, contact with the other driver expected to be running up front, Dino Beganovic, for Ward Racing. Possible outsiders: Small, Bortoleto, David, Boya, Barnard and the Italians Bosco and Spina. All authors of a solid weekend, including Maya Weug (eleventh in Italy), ready to stand for herself, and for female drivers, on her preferred track.


Below, the rankings of the first European round (Sarno, ITA).

HERE the scheduled times of the British weekend.