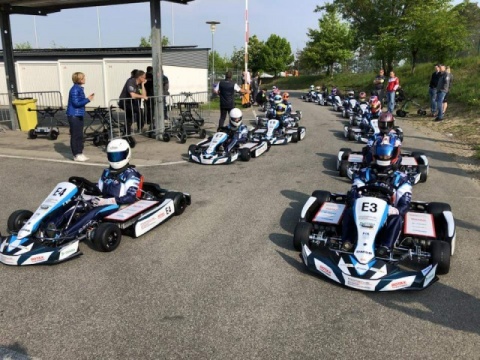 Author: Vroomkart International
With the Wackersdorf runs on May 4 and 5, the adventure of high-level electric-powered karts have begun; the DEKM's.
Deutsche Electro-Kart Meisterschaft is the name of the full-electric series promoted by DMSB and Porsche, which will kick off the weekend of May 13th at Wackersdorf. At the ProKart Raceland the 18 drivers registered for the championship have already taken their first steps on May 4 and 5, an important sign in the history of karting.

If, in fact, a full-electric series is not an absolute novelty, it is undoubtedly due to the support of an important name such as Porsche that the electric first made the news with the hybrid at Le Mans and then (later) with Formula E. The interest of such a large and prestigious firm would suggest a rosy future for the concept promoted by the German ASN, which could entice other automotive companies to move in the same direction.


In the two days of Wackersdorf, 12 rounds were disputed with the karts to be used in the championship, their best time: circa 51". A time that not comparable with the times of an internal combustion engine vehicle with their minimum weight well beyond the weights we are used to, 215 kilograms versus 175 kg of the DD2 by Rotax, concept on which the series is based.

On a technical level, the DEKM is based on the e-kart of the BRP-Rotax, that is, the THUNDeR we at Vroom first met during the presentation at the Red Bull Ring of Spielberg last September. A vehicle that had already, indeed, impressed us for its performance.

Born on the basis of Sodi Sigma DD2, it is equipped with a synchronous permanent magnet (PMSM) engine combined with lithium ion batteries, which allow it to reach a maximum speed of 130 km / h with acceleration from 0 to 100 in 3.5 seconds. It is still unclear whether the boost will be used, which increases the power of the THUNDeR from 20 kW to 24 kW.

Albeit thanks to the support of a unique partner such as Porsche, Germany has had the courage to make a very ambitious choice; the success of DEKM could therefore open important scenarios for the future of karting.

The world's first electric kart championship  celebrates it world premiere from 12 to 13 May as part of the German Kart Championship (DKM).