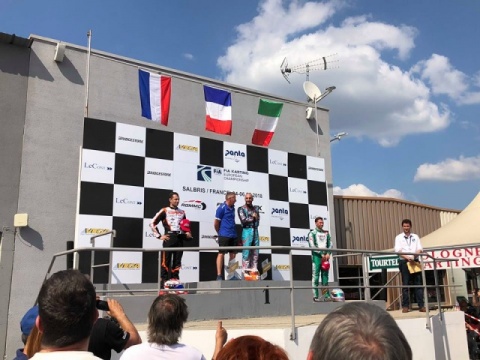 Author: Vroomkart International
The curtain falls on the first stage of the European Championship KZ and KZ2 class. The scorching heat and the even more incandescent battles of Salbris bathed the Sunday afternoons in French colors with Renaudin (KZ2) and Iglesias (KZ) winning at home.

France takes two home thanks to the double triumphs in the geared classes. A Sunday worthy of motorsports bearing the European CIK FIA title.

KZ2
With the heat in the archives and the starting grid now decided, foot on the gas for twenty-one laps of the final. At the start Adrien Renaudin easily takes the lead (Sodi / TM), quick to create a gap and set the pace from the first corner. Behind him, applause for the lightning-fast start of Pierre Loubere (Praga / TM) from the fourth spot on the grid. A French duo plus a good Hubert Petit (Sodi / TM) immediately behind, a full-French wave. After the first laps as a compact group, an open road for Renaudin and Loubere, already out in front and alone from lap seven. The show, however, is behind them with the undecided fight for third place, key for the race. Tires down, Petit in front of the Italian duo, Piccini-Longhi. A duel lasting throughout the race but, in fact, never in place, the Tony Kart standard-bearer a step away from the winning dive for the podium. At the end of twenty-one laps, the French trio under the checkered flag with Renaudin and Loubere at a distance of seven tenths of each other. Petit closes on Piccini (Tony Kart / Vortex), an excellent fourth and first of the Italians, along with Longhi (BirelArt / TM), fifth.
Positive the sixth position of Giacomo Pollini (Formula K / TM), not brilliant at the start but very solid on the final race pace. Top ten completed by Gillian Lay (Sodi / TM), Daniel Bray (GP Alu / TM), Maximilian Paul (Dr / Modena) and Benjamin Tornqvist (CR / TM), thanks to ten positions recovered. Noteworthy, the great race of Giuseppe Palomba (Intrepid / TM), seventh behind Pollini, then penalized with ten seconds for the wrong position of the front spoiler. An accident involving four drivers during the eighth lap curtails Benavides (Sodi / TM), Vidales (Tony Kart / Vortex), Cunati (Top Kart / Parilla) and Leuillet (Sodi / TM), out in turn two.

KZ
Much happens in the weekend's premier class. The long awaited first European final rewarded the spectators of Salbris. Empowered by the weekend's excellent results, a slingshot start by Pedro Hiltbrand (CRG / TM) from the fourth place at the start. The dangerous stalemate of Federer (CRG / TM), then shuffled places for the remaining positions with Jorrit Pex (CRG / TM) and Paolo De Conto (CRG / TM), practically on the virtual podium. Behind them, storming ahead was Jeremy Iglesias (Formula K / TM) and Marco Ardigò (Tony Kart / Vortex). The Frenchman rushes forth lap after lap, taking advantage of a set of tires perhaps better than the others, up to the second position behind the Spaniard. A two-man battle much-felt by fans and partly started up to the technical problem that, alas, stopped Hiltbrand.
“Gripped” and lost victory by the Spaniard, in any case the frontrunner at the start. As said, a rewarding ride forth also for Marco Ardigò, who finished just outside the top ten after the start, because of the stalemate in front. The great pace then allowed the Italian to climb through the ranks until the final bronze medal. Hands up in celebration for Iglesias and leadership turned into victory in front of Jorrit Pex, Ardigò and De Conto. Fifth Anthony Abbasse (Sodi / TM), sixth Alex Irlando (Sodi / TM), both authors of a good comeback with nine and four positions recovered respectively. Closing the top ten are: Hajek (Kosmic / Vortex), Puhakka (Tony Kart / Vortex), Celenta (Prague / TM) and Rick Dreezen (BirelArt / TM). Note of merit for Celenta, able to recover nine positions.

FIA Academy
A fun race even for the weekend's youngest. A much-fought Final with overtaking made and succumbed out in front that, in fact, held everyone's attention throughout the seventeen laps. Jose Maria Boya wins in front of Kobe Pauwels and Sami Meguetounif. Good weekend for Federico Albanese, tenth and the only Italian in the race.