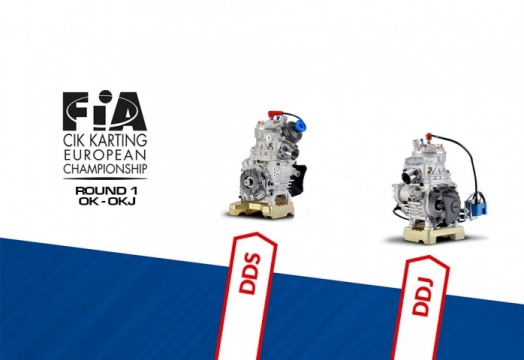 Press Release by: Vortex
Aron and Stanek’s success. 10 wins in the heats of the OK class ...
Aron and Stanek’s success. 10 wins in the heats of the OK class. 13 important positions in the Junior class. All these are the extraordinary results of the Vortex engines on the occasion of the European debut of the Kart Grand Prix Italy of Sarno.
OK - DDS ENGINE
Important weekend to be remembered for the Vortex engines, on the occasion of the first round of the FIA Karting European Championship of OK and OKJ categories. In the OK class, the DDS engines are successful even before getting on track, chosen by 40% of the drivers at the starting grid.
Even once warmed up, the Vortex engines confirm to be an absolute key point: with 57''162, the fastest driver in the chrono heats is Zane Maloney (Ricky Flynn Motorsport), which subsequently hits two heats as much as Roman Stanek (Kosmic Racing Department). Four, however, are the successes in the eliminatory heats of Harry Thompson (Ricky Flynn Motorsport), next to David Vidales and Noah Milell’s victories, bearers of the Tony Kart Racing Team.
Among all these Vortex-powered-drivers, in the final is Roman Stanek having the best: the Czech driver, in fact, leads the decisive race of the weekend, showing off the excellent performance of the DDS engine of his Kosmic Mercury S chassis. Also, Harry Thompson gains the podium, third place at the finishing line, while Juho Valtanen (Kohtala Sports) and Viktor Gustafsson (Kosmic Racing Department) enter the top ten.
Stanek and Thompson are also first and third in the provisional general ranking.
OKJ - DDJ ENGINE
Great European debut also for the Vortex DDJ engines, chosen by 27 drivers out of the 78 checked (35%). Among them, the most concrete is Paul Aron (Ricky Flynn Motorsport), able to hit the fastest time in the chrono heats, able to lower it again in the qualifying heats (best lap 59''445), where he manages to achieve the success not less than four times. Also in the heats, the leaders are still the Vortex engines of Conrad Laursen (Ricky Flynn Motorsport), three wins, Dino Beganovic (Ward Racing), Kai Askey (Ricky Flynn Motorsport) and Kirill Smal (Ward Racing) with two successes each.
Great performances also confirmed in the final, where there are seven DDJ engines in the Top 10: among them, once again Paul Aron’s, winner of the decisive race of the weekend and at the top of the provisional ranking of the European with a full score.
On the podium of the final, third place is also Kai Askey, immediately followed by Kirill Smal (fourth), Conrad Laursen (fifth) and Dino Beganovic (sixth).