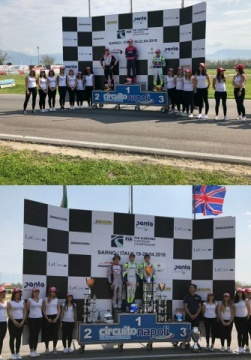 The first European FIA Karting Sunday has come to an end with the OK and OKJ classes racing in Sarno. A very solid Roman Stanek (Kosmic / Vortex) won in Senior, while the Estonian Paul Aron (FA / Vortex) raised the winner's cup in Junior.

OKJ - On Sunday morning, an appetizer of the forthcoming bagarre thanks to the last phase of the direct clashes. As expected, a clear run by Paul Aron (FA / Vortex), winner of all the heats, hence poleman of the final. Second and third place, assigned to rivals Dino Beganovic (Tony Kart / Vortex) and Conrad Laursen (FA / Vortex).
After tallying the scores, the starting grid readied, with huge expectations for the final.

Lightening start by Aron, immediately gaining on rivals Beganovic and Askey. In full on mode, the Ricky Flynn Motorsport driver raced alone out in front all the way to the checkered flag. Behind him, a real fight for second position downward. The exchange of positions between the Swede and the Briton favored the return to the battle of Gabriele Minì (Parolin / Parilla), Kirill Smal (Tony Kart / Vortex) and Conrad Laursen ( FA / Vortex). The result: a thrilling second half of the race, especially after Laursen's attack on Beganovic that, in fact, put both out of the fight for the podium. A great pace and an open field ahead allowed the Italian Minì to win himself a much-deserved second place, followed by Askey, constantly in the top three. Kirill Smal and Conrad Laursen complete the top five positions. Of note, the eleventh place of Maya Weug(Luxor / LKE), after her departure from grid position thirty-three. Zak O'Sullivan (FA / Vortex) was disqualified for unsportsmanlike conduct, following a race incident with Alfio Spina (CRG / TM).


OK - After an astounding pace in his group yesterday, Harry Thompson (FA / Vortex) failed to replicate today, indeed, a stop in the last battery deprived him of a position in top 3. pole position went to Roman Stanek, who then led the Final without worry ahead of Pedro Hiltbrand (CRG / TM) and Thompson, able to recover 8 positions from his starting position.

Finishing fourth and fifth were the Finn Juho Valtanen (Kosmic/Vortex) and Kas Haverkort (CRG/TM). The race was not exempt from moments of apprehension, caused by the reversal of Lorenzo Travisanutto (KR/Parilla), announced at the beginning of the weekend among the protagonists.

At the bottom of the results in PDF