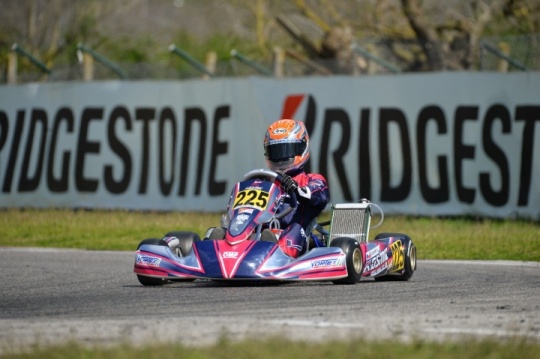 Press Release by: Kosmic
Everything is ready, in the Kosmic Racing Department, for the event of April 19th-22nd
Everything is ready, in the Kosmic Racing Department, for the event of April 19th-22ndat the International Naples Circuit of Sarno, where the CIK-FIA European Championship & CIK-FIA European Junior Championship 2018 is taking place.
In the weekend of April 19th-22ndit will once again be the International Naples Circuit seeing the Kosmic Racing Department on track. After the last two rounds of the WSK Super Master Series, in fact, the leaders of international karting go back on track to fight for the first round (out of four) of the CIK-FIA European Championship2018 reserved for theOK and OKJ categories.
In the Italian Kart Grand Prix debut race, our drivers running in the OK class will be Roman Stanek and Viktor Gustafsson, ready to drive to the top positions their Kosmic Mercury S chassis powered by Vortex engines. The potential is clear, as shown in the recent events of the WSK series, where our drivers have progressively improved their performances, gaining important positions among the best ones.
In the OKJ category, David Hadrien and Rafael Camara thunder and are willing to immediately start on the right foot for aiming to the most important positions in the rankings.
The action on the track of the first round of the CIK-FIA European Championship & CIK-FIA European Junior Championship 2018, at the Naples International Circuit of Sarno, will benefit from the live timing service at http://www.apex-timing.com/live-timing/cik-fia/index.htmlsince the free practice on Friday. The eliminatory heats and the finals on Sunday, however, will be broadcast live streaming on the official http://www.cikfia.tv/website.
Timetable:
Thursday 19thApril: Briefing, technical and sporting checks
Friday 20thApril: Official free practice, Chrono Timings
Saturday 21stApril: Warm-up, Eliminatory Heats
Sunday 1stApril: Warm-up, Eliminatory Heats, Finals