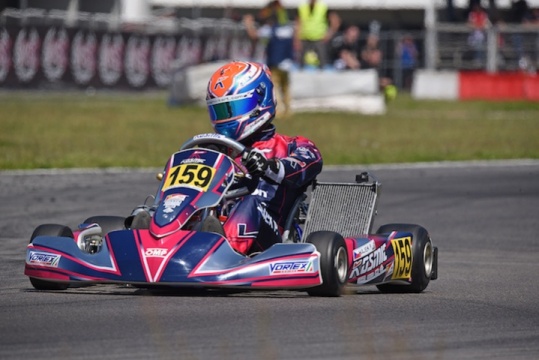 Author: Vroomkart International
Patrik Hajek talks to Vroom and explains the reasons for his absence in recent times.
"What if I had never tried" is the title of the Valentino Rossi's autobiography which came out in bookstores in 2006. A title useful to the world of karting regarding Patrik Hajek.

In the Czech's initial plans, in fact, there were to be no WSK appearances, but in his two races he did get on the podium both times proving that, when it comes to the racetrack, Hajek is always ready to make his mark. The two podiums, however, have done nothing but increase the curiosity surrounding his choice to decrease his driving commitments, so we decided to talk to him in the paddock at Sarno to find out more.

«By contract, I wouldn't have had to do the WSK, but only the European, the World Championship, and some tests» he said. «In the end, however, with the team we decided to dispute the race in Muro Leccese and in Sarno to prepare ourselves better before the continental competition».

Why this sudden idea to reduce races?

«The are two reasons: the first is that I don't consider it useful to run with the low temperatures we had in January and February, since the main competitions are disputed later with temperatures that are, all in all, hot. Also, with fewer races, I can concentrate more on Roman (Stanek) ... ».

So are we preparing to see a Patrik Hajek on the other side of the wall as a driver coach?

«Essentially, yes. It will be a gradual process, but I cannot "keep racing my whole life, this is clear».

Meanwhile, retirement or not, the racing pedigree of Hajek has not failed him, and in fact his booty features two podiums in as many runs ... so imagine he'd never tried.