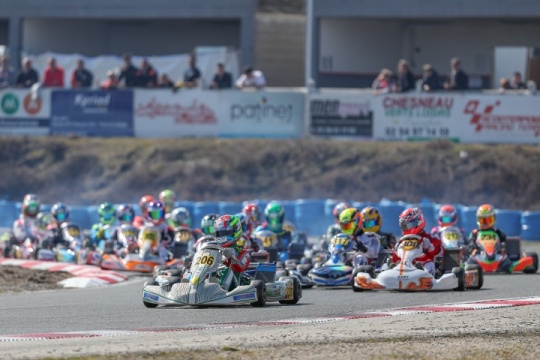 RGMMC always making the best efforts to set the benchmark for motorsport race organization and promotion, once again continued innovating with most notable this weekend the big improvements on the quality for the Live Video coverage, demonstrating the strong belief in the importance of delivering the full racing experience straight to the viewers, for the entire duration of the event.

Ottink got the best of Melendez at the start of the final, while behind them a collision saw Abraham, Ruiz Alvarez and Kowalewski’s race end at the first corner. On the third lap Volt made his attack overtaking Melendez and a couple of laps later taking the lead. This however didn’t last long as a battle between the three saw them exchange positions several times in the closing laps with Melendez crossing the line first just a tenth of a second ahead of Volt with Ottink losing out to the recovering Peiro, who fought his way back all the way from last on the grid to complete the podium.

Piirimagi made sure he didn’t give any space to his competitors, taking the lead straight from the start and opening a gap of more than half a second each lap, eventually finishing a full 8.3 seconds clear. Behind him however there was an intense battle between Seewer whose flying start allowed him to jump to second, Delré, and Lüdi who seemed to have found a solution to the earlier problems with his pace. Seewer maintained second position for most of the race, however in the closing stages he was overtaken by Delré, and Lüdi. The race finished like this with Piirimagi taking the win, Delré second and Lüdi third.

The final started with Gilbert taking the start but soon losing out to Lloyd. Quickly after Boya found the opportunity to take the lead while Gilbert dropped to third. Several position changes followed between the three which gave the space to Rimmo Kadapik and Luca Leistra to get in the mix. While Kadapik proved unlucky and dropped back together with Lloyd, Leistra didn’t let the opportunity to grab third place, with Dimitrov and Van T’Hoff following behind. The race finished with Gilbert taking the win, Boya second and Leistra third.

The start of the final saw Kimber quickly take the start and disappear into the distance, while Keirle who quickly passed to second place on the first lap struggled to follow. Prouteau and Van Pelt couldn’t stay in touch with the leaders and it was instead the Dutch Joey Van Splunteren who come back from sixth to challenge Keirle for the second. Kimber made it look easy, finishing over 4 seconds ahead of Keirle, and Van Splunteren getting the last step of the podium.

The first points were awarded in the four categories with the respective winners Alejandro Melendez, Sten Piirimagi, Lewis Gilbert and Mark Kimber leading the way for the following three races. Next stop for the Euro Series will be in Mariebourg, Belgium on March 27.