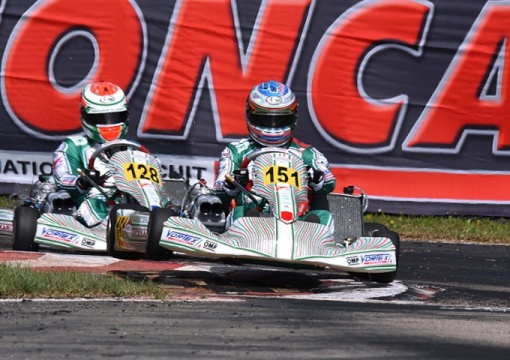 Author: Vroomkart International
From his injury in Sarno in 2017 to his return at Muro Leccese, the whole story of Marco Ardigò's injury and recovery.
Almost a year later, Marco Ardigò gets back on track and conquers a KZ2 podium during the third WSK race at La Conca. An important result especially in view of the forthcoming Cik Fia races. The standard-bearer of Tony Kart tells us about his return to racing.

All's well that ends well, indeed, especially after his performance at La Conca showing fans and rivals that the period of convalescence is definitively over.


"The incriminated rib" is what Marco Ardigò calls the axillary rupture of the sixth right rib which, due to the calcification of some nerves, kept him away from the track for a long time ... too long.

“Regarding the incriminated rib, I'm fine. It didn't bother me during the Apulian weekend. Obviously I'm behind in terms of physical preparation, since before Muro Leccese I had only done three outings of fifty laps each," Ardigò said. “The soreness came right on time at the end of the first day, but I bit the bullet. In the Final, the last 6 laps were very trying, but I wanted to bring home the result”.
Marco speaks about the different phases of his convalescence.

In April the injury during practice of the first stage of the European Championship in Sarno: “I immediately understood it was something serious, but unfortunately it took several months to understand the true entity of what happened.”

The extent of the accident clinically emerged in August

“I did a 3D CT scan in early August. Only then was the fracture finally found. The problems, in addition to the breakage itself, were the lesions of the soft fibers present in the sternum area, and the calcification that affected the nerves present between the pleura and the rib. Just to understand this took some time.”
Pain in September the World Cup in Wackersdorf

“In retrospect, it might have been better to avoid racing, but I immediately tried to get back on the kart at the CIK FIA World Championship, the highlight of the season. We opted for the use of anesthetics that relieved the pain during the first two days of the week, but then the situation became progressively more difficult.”

After the World Cup the shadows of retirement
“When I came back from Germany, I did other tests and they revealed calcification of the nerves. Initially the possibility of an operation was discussed, but then it was avoided thanks to the nerve alcoholization treatment. If this hadn't given the hoped for results, I had already considered the possibility of quitting. Fortunately, however, it's working fine.”
Last weekend the light at the end of the tunnel: officially back at the wheel of his Tony Kart / Vortex, Ardigò swept away the negative aside with a brilliant 2nd position at the height of a Final that had seen him in first position during the first three laps. His presence can only be a huge plus to the forthcoming European championship and the KZ World Championship that are so uncertain and hard fought despite being dominated in the last two years by Paolo De Conto on Crg / Tm.